THE OWNER OF NEWPORT’S ICONIC SURF SHOP, THE FROG HOUSE, PROVES THAT IT TAKES A CHARACTER TO RUN A LOCAL LANDMARK. 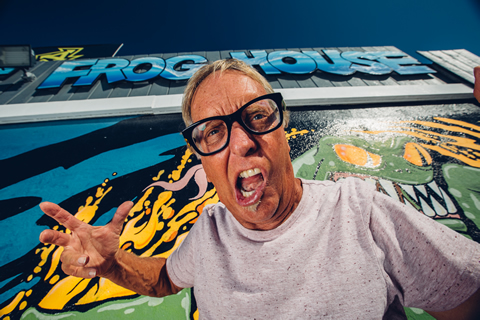 The expansive stretch of highway known affectionately as PCH is home to hundreds of businesses, but there’s one that resonates with the surf community as a tried-and-true surf shop. Known by surfers everywhere, the small, Kelly green Frog House on the north end of Newport Beach has avoided selling out to the corporate-run surf shops that Southern California is so accustomed to—and for this, it is celebrated.

The shop has changed hands just once since its inception in 1962, and today it boasts a frontman who lives and breathes the California surf lifestyle—the venerable TK Brimer. TK is the second owner of the shop and, after he bought out the business 37 years ago, the names Frog House and TK have become practically interchangeable.

A Surfer and His Shop

As you walk into The Frog House, you’re hit with a medley of scents that bring to mind memories of morning surf sessions—a mix of wetsuit rubber lingering with a hint of surfboard wax and a touch of salt to top it off. The young men manning the front embody the surf culture, down to their lean statures and knobby knees. No computerized touch screen register finds a home on the counter; rather a sticker-laden pop-out register complete with receipt booklets to record transactions occupies the space. Beyond the counter, two hallways filled with memorabilia lead to the belly of the shop, one overflowing with Frog House T-shirts and wetsuits for young and old alike and the other lined with surfboards—short to long, new-age epoxy to vintage foam, and some awaiting transportation to a ding repair specialist. 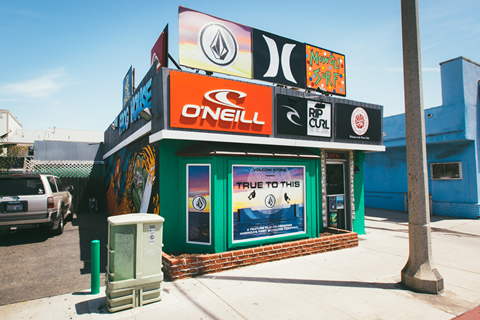 Toward the back, a small Dutch door leads to a break room filled with more wetsuits, merchandise and boards. Tucked behind this organized mess is one last secret that ties in nicely with the perks of working at The Frog House (in addition to the discounted wetsuits and ability to test out boards): a hot outdoor shower perfect for rinsing off after a long surf session.

While the tides have changed around Newport over the decades, The Frog House has preserved its original charm, a feat credited to its current owner, TK, who claims he is 65 going on 25.

“We have a bunch of characters that work here, and it starts with Teek,” explains 15-year employee Mikey “Beho” Flores of his boss-turned-friend, who has kept The Frog House operating as Orange County’s oldest known surf shop still at its original address, 6908 W. Coast Hwy. “He is the biggest character and the funnest guy you could ever be around. … He has this personality where the minute you meet the guy, you like him. We all feed off of that. He creates a vibe, and you don’t get that when you walk into [other surf shops].”

It’s as if the young TK, who grew up in Titusville, Fla., was destined for this life as soon as he picked up his very first surfboard—a 9-foot, 6-inch pop-out Coastal surfboard that he took a loan out to purchase. 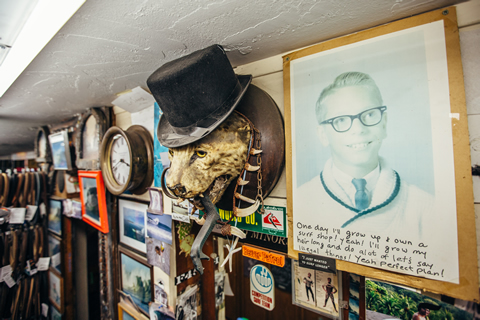 Meanwhile, on the opposite side of the country, a guy by the name of Frank Jensen, who was not so much a surfer but more a surf culture fanatic, was in the process of opening a shop catering to this lifestyle. In 1962, The Frog House—which, as legend has it, was named after an especially quirky bachelor known around town only as “Frog”—opened and quickly transformed into the go-to spot attracting local surfers.

At the same time, Southern California was coming into its own as a mecca for aspiring surfers and, as fate would have it, TK’s father was transferred from Cape Canaveral in Florida to Huntington Beach right before TK’s senior year of high school in 1967. TK was given the option to stay in Florida, to which he only had one reply as he set out for California waves: “No, I’m a surfer.” The next thing TK knew, Frog House team rider and new surfing acquaintance Charlie Rey was introducing him to Frank.

“When I walked through The Frog House front door for the first time I just had an epiphany of, ‘Wow, it’s a surf shop that I’ve always dreamed about,’ ” TK recalls. “I started immediately selling for the owner, but he didn’t give me a job right away.” 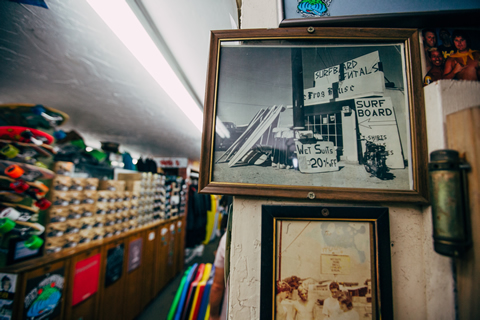 For five weeks, when a customer would come in, TK would walk them through the shop, demonstrating his knowledge and his ability to sell. Frank hired him shortly after, and TK fit in wonderfully with The Frog House—but it was only a matter of time before his entrepreneurial spirit took over. After marrying his wife, Linda, he began having thoughts of starting a family.

“You don’t make very much money working behind the counter at a surf shop,” he explains. “So I went to Frank and said, ‘Hey listen, I’m going to start my own shop—or are you interested in selling this one?’ ”

It took some negotiating, but after 15 years of business, The Frog House ownership changed hands for the first (and only) time in 1977.

Getting His Frog Legs

The Frog House is successful, but TK says he isn’t in it to make big money; the driving force behind his business model is staying true to the foundation of the surf shop. “[The industry today] is all about clothes, but I never grew up wanting to work [in] a clothing store,” he explains. “I grew up wanting to work in a surf shop, so I’ve resisted that temptation to go for that money. … A big-time surf shop might be 85 percent clothing, 15 percent hard goods; we do about 85 percent hard goods and 15 percent clothing. ” 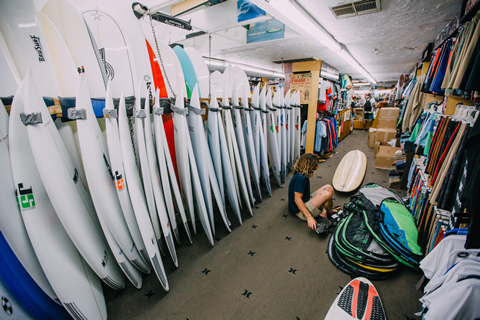 Sticking to this model allows TK to manage in his own way, something the guys around the shop agree is the perfect balance of organization and chaos, explains seven-year employee Travis Lagerlof, who’s better known as “Home Depot.”

“There is a technique in his management, which is like management by chaos,” he says. “It’s a successful way to manage a company if everyone who works for and with you [is] on board. Yeah, it’s all over the place, but it makes sense.”

TK has only had one scare of closing The Frog House doors during his tenure; in July 2010, the city sent a notice saying the land he was operating on was not zoned for commercial use, meaning he had 90 days to close up shop or apply for a costly rezoning of the property.

“I was devastated; I felt threatened,” he remembers. This, however, led to an outpouring of support and a successful outcome, with people writing letters, setting up a “Save The Frog House” Facebook page that garnered 17,000 likes (more than even the city’s page at the time), and a former customer even sending a box full of “Save The Frog House” stickers for free.

“[The box] was from a guy named Larry who said in the 1980s, The Frog House gave him a wetsuit and discounts as [he was] an aspiring pro surfer,” TK explains. “[His letter said], ‘It never left my mind that The Frog House supported me with my dream.’ ”

According to TK, if you can count popularity of Southern California surf shops in stickers, his is most popular because the logo of a surfer barreling out of a frog’s mouth is affixed to cars lining PCH from north to south. That iconic image was actually the product of a deal he made with a short-on-cash customer one day. 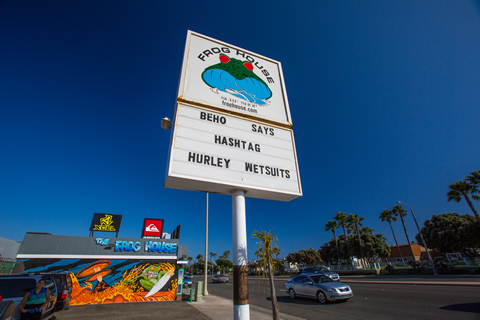 “[This guy named Brom came in and] he said, ‘Listen, I don’t have any money, but … I would like to know if you’d let me do some artwork in exchange for this used board,’ ” TK recalls. “I told him the place had been called The Frog House for 15 years, but we don’t have a logo. … He came back the next day with the logo we still use today.”

The only other priority at The Frog House is simply enjoying life, and the lineup of young employees keep the vibes lighthearted.

“Without being an activist, he’s trying to pass onto the community and the people that shop here how important it is to be in love with something you can do everyday, and not be concerned with if its earns or loses you money. … A lot of that just bleeds through the walls,” Travis explains. “[The Frog House has] made a name over the last 30 years of being a party crew. We’re the people known for causing a ruckus at surf industry gatherings; everyone looks forward to The Frog House being there, starting trouble.” 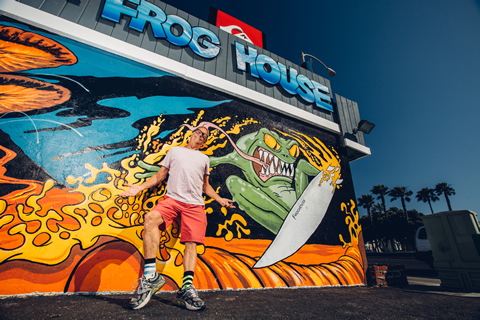 “I always say, when you work for peanuts you get monkeys,” TK says of his employees, all of whom are given nicknames inspired by anything from previous employers to outfit choices. One could argue this trend was inspired by the namesake friend Frog, or it’s simply because TK says he can’t remember names—ever—so monikers like Home Depot, Chino and Hoto Joe have stuck.

There’s never a dull moment at The Frog. Beyond the tongue-in-cheek nature of the nicknames, every day consists of on-the-clock surf breaks and an afternoon ritual of lobbing dollar coins at a designated “H” embroidered in the Hurley carpeting to determine lunch—which is bought by TK every day and chosen by the winner of the game, though 20-plus rules guarantee the newbies have to learn a few tricks. The 65-year-old frontman fondly recalls each and every antic as he sits reclined with his feet resting on a workstation occupied by two Chandler sewing machines used for The Frog House’s one-of-a-kind wetsuit repair service (most people don’t go through the process of repairing wetsuits, TK explains). 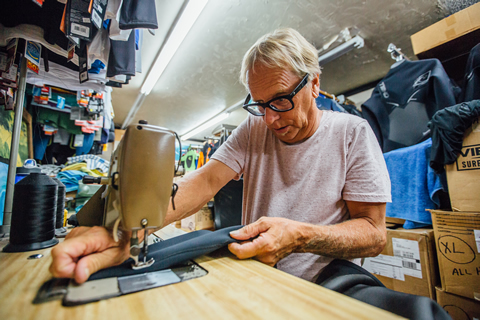 “[TK has] the energy of a 20-year-old and has no filter at all, but inside he has the biggest heart and sincerely cares and loves all the people that work for him,” Travis says. “The Brimer family, in general, has these core values that bleed into the way the shop is run.”

This also accounts for the multiple generations of customers that visit the shop daily after building a bond with TK and his business—a loyalty that Beho says is unmatched. The pair, who boast the oldest ages in the shop but the youngest mentalities, have traveled the world together with various big names from the surf industry, and through it all, they still make it a point to paddle out from the mouth of the Santa Ana River across from the shop and catch a few waves together daily.

“We’re kind of best friends, but more importantly, we’re surf buddies,” Beho says. “He takes care of me in the water and I take care of him. He would literally go above and beyond the call of duty to save me if I was in trouble.” 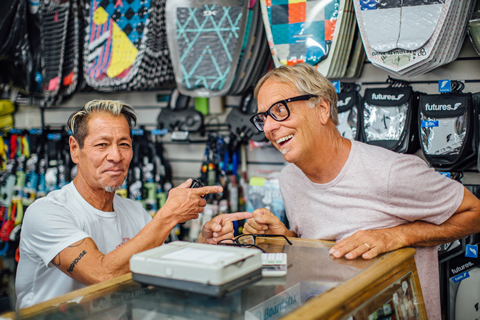 And at the end of the day, you don’t need to go inside to see that the colorful Frog House and its staff are more eccentric than any other Newport business. TK, although outspoken, makes The Frog House what it is today and, as Beho says, if anyone but TK were running the shop it just wouldn’t stay afloat.

“The bottom line is I don’t want to go anywhere,” TK says of his plans for The Frog House’s future. “I’m 65 years old, but I feel 35 and sometimes I feel 25. It’s such a love and joy for me to run this place that I don’t have any desire to quit doing it. … If I’m not surfing, then I’m not running this place because this is a surf spot. I’m not going to be the old man that used to surf.”