Lido Isle is a community in the middle of Newport Bay, between Pacific Coast Highway and Balboa Peninsula. Streets are named to evoke the Mediterranean, including Via Barcelona, Via Genoa and Via Nice. A small bridge links the approximately 850-home community to the city. Water-adjacent lots have slips for boats. Residents enjoy the outdoors—with a nationally recognized yacht club, junior sailing program, parks and three tennis courts.

The community is organized around several strada (walkways) which traverse the island north-to-south. The only commercial facility on the island is a small snack shop that opens during summer at the Clubhouse—a hub of community activity, with Monday night football parties, daytime yoga or cooking classes, family get-togethers in the summer and the boat parade party in December. Residents also appreciate being able to walk to so many destinations, including the theater and nearby restaurants. 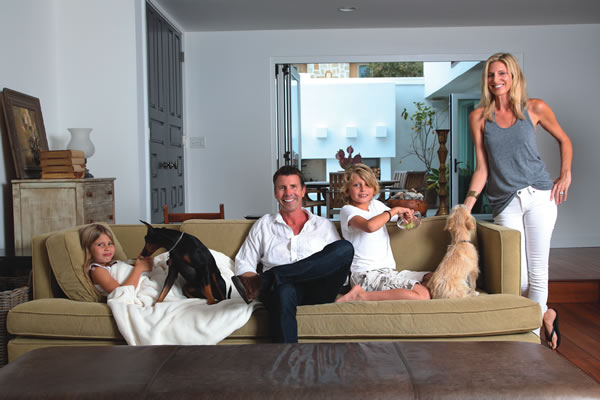 When the Schmieders went to see the 1963 burnt orange Mediterranean stucco house with the cobalt blue door, they loved the flow of the rooms, floor plan, sun exposure—and that front door. The welcoming, oversized door remains, now a toned down blue-grey, but still the focal point of the front of their white, two-story home landscaped with large shrubs between the home and the sidewalk. The facade is simple—Mediterranean in spirit, with right angles and clean lines.

The Schmieders bought it in 2010, and then did renovations in two phases. First, they gutted the upstairs. The next phase involved remodeling the kitchen and dining room. In the end, they say, they replaced everything but the roof. 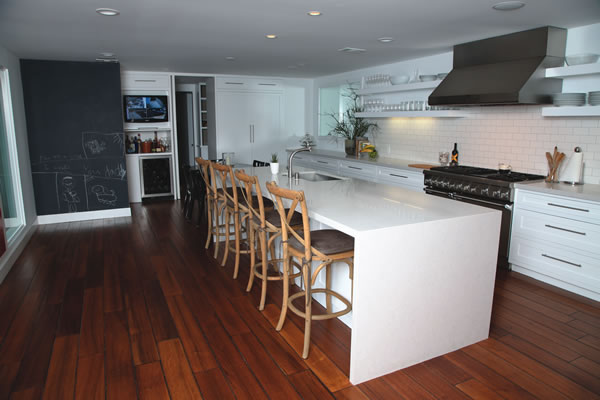 “We wanted to make it where other people could be comfortable here,” Dean says. “We wanted a big kitchen, a big island. And we could fit in here, sitting down to eat, probably a good 50 people.”

When they approached the remodel, they looked for a clean, modern take on the existing home. The result is a sleek look with a natural, welcoming vibe. The walls are white, and the floors a warm teak. They added LaCantina doors so the kitchen area opens seamlessly to the courtyard. “We wanted it to be open, to where it was almost wall-less,” Dean explains.

Outside, they put down large custom concrete pavers, and to personalize them, added shells to the concrete mix that the kids collected.

Some accents of the original home were retained, including doorknobs and light fixtures. There is also a two-story bottle glass panel that adds light and atmosphere in the stairwell, with the original railing. 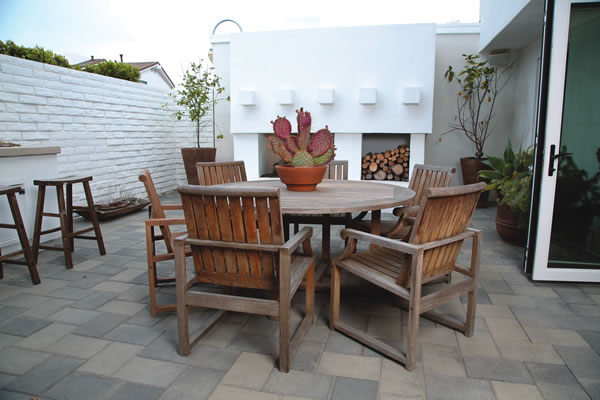 “We wanted a family house—architecturally interesting—but we still wanted it to be a family home for our kids, something that would be great for all of us,” Diane says. The whole family enjoys the walkability of the neighborhood, the island’s parks and the sailing lessons at the yacht club. In addition to walking to restaurants, the Schmieders enjoy riding bikes. “Since I was 12, I’ve never been much of a bike rider, so it’s kind of fun to get on the beach cruiser and hit the town,” she adds. 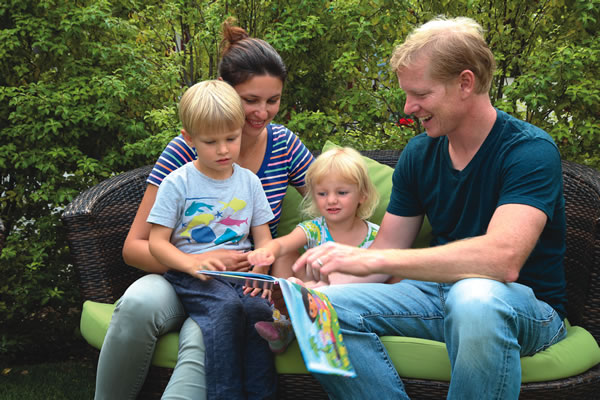 Juliane and Lars Mohn’s warm, subtle yellow, two-story stucco home opens to the main living area, with vaulted beam ceilings. The front of the house has a lot of window space that allows them to enjoy a view of their landscaped yard and the strada adjacent to their property. The garage faces the street, with black shuttered windows above and bougainvillea climbing up the wall.

When they bought the home in 2008, they knew they wanted to live in the peaceful beach community for all the outdoor opportunities it offered their growing family. Inventory was tight at the time, so they picked their home because it suited their needs and was nearly turnkey. 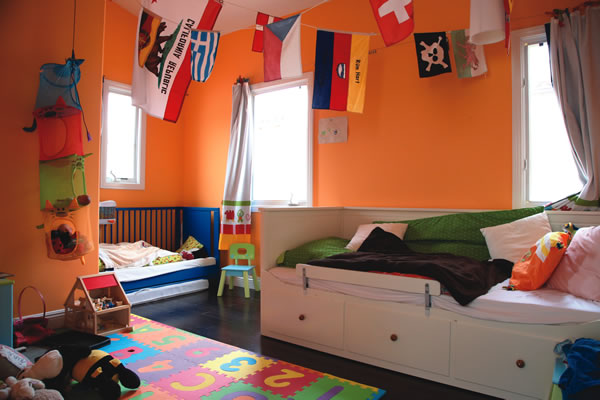 Over the years, they have made changes: They’ve remodeled two of the three bathrooms, removed a fireplace from the upstairs master bedroom, replaced flooring upstairs with chicory, and stained the wood downstairs to match. They also revamped their garden, which is large by Lido Isle standards. Recently they completed a remodel of their kitchen.

They envision their home as a contemporary beach house—modern, with clean lines and European style. Juliane also wanted a European aesthetic in the new kitchen. This meant getting rid of the island, creating a more open space, with a table in the middle. “Now the living room blends in with the kitchen; it is all just one space,” she says. They also switched the appliances to all panel-front instead of stainless. They changed the floors from wood to silver tissue tile. And, Juliane adds, the tiles have floor heaters. “If we do it, I have one chance to do it right,” she says. The room also has complementary grass cloth wallpaper. They removed the drywall from the dropped ceiling and now have a higher, slanted beam ceiling. 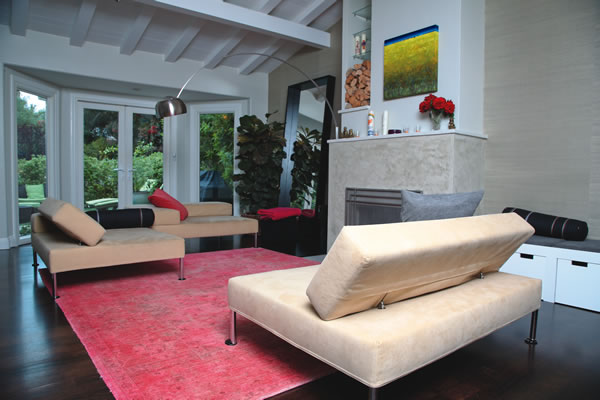 Besides the main living area, the downstairs includes one bedroom and bathroom, and the staircase wraps around an open, built-in office space. Upstairs, there are two more bedrooms, including the master and two bathrooms.

Another standout feature is the garage. With space being at a premium on Lido Isle, garages are a “thing” on Lido. Juliane says people stop and comment on how clean theirs is. Lars installed hooks and storage space to keep the floor clear so he could easily remove dust from the epoxy floors. “My garage is the envy of the street,” she jokes. 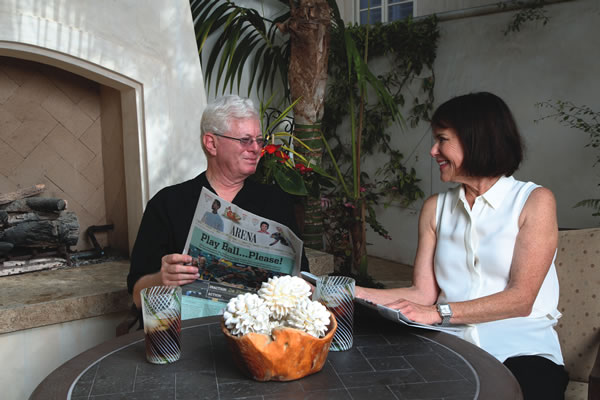 Phyllis and Roger Shafer’s modern two-story home is bright and airy, with light travertine tiles throughout and off-white walls. Two levels of rectangular windows run up the wall opposite the entryway. The home is comfortable and not overly formal. Artwork appears throughout the home, which is decorated in a contemporary and eclectic style.

When the Shafers bought the approximately 15-year-old home in 2004, they began making a number of changes. They redid the kitchen and the landscaping, and changed the floors from the original tile to the travertine. They built a laundry room upstairs and created an open office space with skylights. Most dramatically, they moved a staircase. Hanging from the ceiling above the new curving staircase is a crystal chandelier that they brought from their old home. 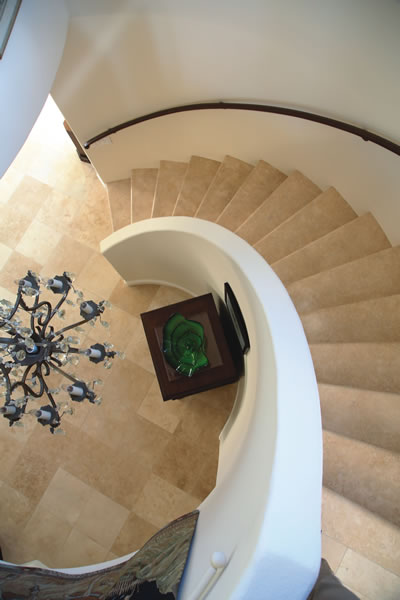 They also reconfigured the entrance to the home. The new front door is an oversized, one-of-a-kind piece—a large, steel-framed glass pane with an irregular vertical wave pattern that they selected at a craftsman’s studio in Huntington Beach. A smaller, matching door leads to the home’s courtyard from the street. The courtyard also has an outdoor fireplace that the Shafers enjoy on cooler evenings.

When they first visited the area, they had been looking to downsize from their larger home in Irvine. After going out with friends one night and heading over the bridge to Lido Isle, they were both intrigued—that Sunday, they started going to open houses in the neighborhood. First, they bought a home that was too small. Then, they negotiated a trade with a couple that was looking to downsize, to end up in their current, larger home.

The quality of life is what they enjoy most about being on Lido Isle. “If I wanted to take a walk late at night, I feel very comfortable going out any time. … I feel safe,” Phyllis says.

Roger says, “You can walk over the bridge, you can go to dinner. Go to The Cannery, Bluewater Grill, or you can walk even further to Il Farro.”

“And,” he adds with a smile, “you don’t have to worry about parking.” Phyllis likes taking her coffee in the morning and sitting out by the strada. When their grandkids come to visit, they like the Strada too—to bike and to use as a canvas for their artwork in colored chalk.  NBM 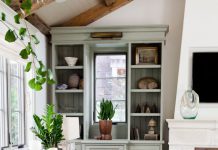