FAMOUS FOR THEIR OWN TAKES ON THE CLASSIC NEWPORT FROZEN TREAT, TWO BELOVED ESTABLISHMENTS ON BALBOA ISLAND GO HEAD TO HEAD EVERY SUMMER.

On a summer afternoon on Balboa Island, visitors and residents alike gravitate toward Marine Avenue, where crowds form around two of the most well-known establishments: Dad’s and Sugar ‘N’ Spice. Although just 100 feet away from each other, the shops share more than just the same street. They both claim to sell the island’s original Balboa Bar—a chocolate-dipped ice cream confection rolled in sweet or salty toppings that has assumed a following of its own on the island.

For those who want to get the scoop on the history and culture of the city’s favorite sweet treat, there’s one man named Bob Teller who claims to know the Balboa Bar’s beginnings—even before the treat appeared on the island. Bob first visited Balboa Island on his honeymoon, but was drawn back to the area in the early 1960s during a trip to California that was intended to help him launch a business making seatbelts. He stopped at the Fun Zone on Balboa Peninsula to buy a frozen banana and, after explaining to an uninterested clerk that he also sold frozen bananas in Phoenix, a man who overheard the conversation, Roland Vallely, approached him.

Roland was trying to rent out a store on Palm Street near the ferry landing and suggested that Teller bring his frozen banana business to the peninsula. Bob initially rejected the idea, but a few months later, he realized making seatbelts wasn’t a profitable venture and decided to rent the commercial space in 1962.

“Before I left Phoenix, I was selling frozen bananas at the fair,” Bob says. “I was right across from a booth that sold chocolate-dipped ice cream, and I noticed that for every banana I sold, they sold 10 ice cream bars.

“[They had] all these bars stocked in the freezer, dipped and ready to go, but [my wife], Rita, wanted a freshly dipped bar,” he continues. To his surprise, the clerk was under strict orders not to dip any new ice cream bars before selling all of the stock. Banking on the witnessed success of ice cream bars, he brought his own version of the treat to his new shop—the Beach Bar. With a focus on great ingredients and a freshly dipped bar for every customer, he got to work using ice cream from Excelsior Creamery in Santa Ana and chocolate sourced from Guittard’s up north.

When asked what made his Beach Bar so popular, he says: “It’s all about the process. People like to see that what they’re buying is made right in front of them. They like to see how it’s made and the steps that go into the finished product.”

Once his business started to grow, it was successfully replicated on Balboa Island by bakeries and ice cream shops—most notably Dad’s and Sugar ‘N’ Spice—that rebranded the confection as the Balboa Bar.

“When I bought Sugar ‘N’ Spice, I thought I was retiring,” Helen Connolly explains.  Little did she know, she would be next in a long line of owners that would continue the Balboa Island tradition of crafting the perfect Balboa Bar. Since the mid-1940s, there have been five owners of Sugar ‘N’ Spice—and, although the history of each owner over the years has been lost to time, the love of the Balboa Bar has survived. 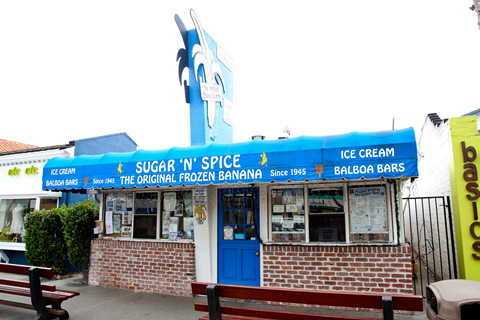 Helen learned how to make the bars from the previous owner, but she has since brought her own flair to the walk-up stand’s menu. Her ice cream bars come with toppings such as Blue Diamond almonds, peanuts, sprinkles, coconut and her own special creation, Heath pecan crunch.

“I love it, because when people and their children come to me, it’s ‘treat time,’ and everyone’s in a great mood,” Helen says. “After people buy their ice cream, they sit on the bench across the sidewalk. Before I know it, the strangers sharing the bench are talking, and the benches become a happy kind of family.” 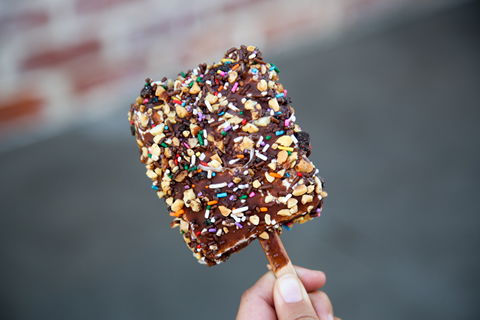 The joy that Connolly spreads doesn’t stop at the island youth. “… We get just as many adults coming to buy ice cream, too,” she adds.

Three storefronts away from Sugar ‘N’ Spice, Dad’s is known as “a fixture of Balboa Island,” according to longtime patron Brian White, grandson of the Galley Cafe founders Myrtle and Eddie Flach. When they weren’t in the kitchen, Brian and his grandfather rode their bikes to the island for one of Dad’s famous bars. 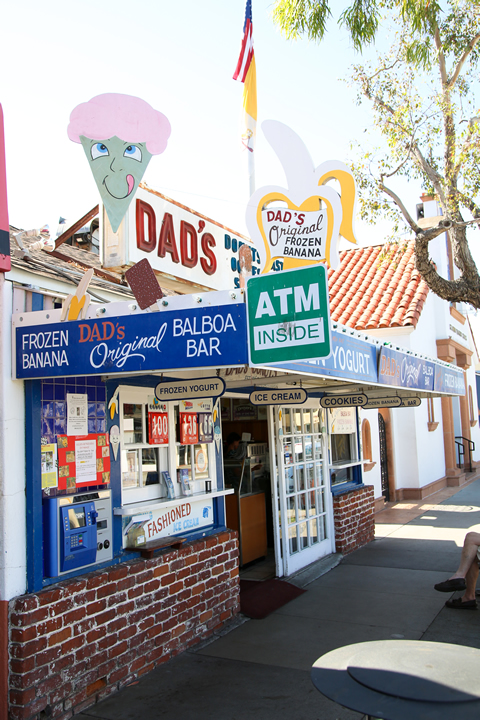 “There’s just something about them—maybe the way the shell crunches around the ice cream,” Brian explains, before he adds that he’s always taken his bars with chocolate and peanuts only—a self-described purist. “I had my first [bar] there at Dad’s, and I’ve just kept going back ever since.”

Dad’s, a small walk-in shop that dates back to 1960, has a history just as unclear as its counterpart’s. The current owner, Vann Yam, purchased the business in 1990, and has run it steadily ever since. Long before Vann owned the shop though, a former employee, Diane Bernie Bock, was proud to call Joe “Dad” Anderson her boss.

Diane, who submitted a written account titled “Balboa Island Love Story” to the Balboa Island Museum and Historical Society, detailed her experience working behind the counter and dipping the treats into chocolate: “My very first shift happened to begin about an hour after a pipe had burst in Long Beach, and a toxic cloud was wafting down the coast,” she wrote. “Radio announcements cautioned everyone to remain indoors, and just as I arrived at Dad’s, a fire truck cruised up and down Marine [Avenue] with a loudspeaker asking everyone one to go inside.” Hearing issues made Anderson unaware of the emergency, and according to Bock, “… He refused to close his doors and was very grumpy about it. I wondered whether I might lose my job five minutes after I started, but fortunately it all blew over.”

Since little more is officially on record about the shop’s origins, what remains are memories like Brian’s and Diane’s. These stories, some of which go back decades, have taken the place of a formal history.

“Dad’s has a personality on the island,” explains Shirley Pepys, creative director of the Balboa Island Museum and Historical Society. “Since the 1980s, different groups of people have come as early at 6:30 a.m. to meet in front of Dad’s. Then other groups come after 9 or 9:30 when church lets out. It’s a social stop.” 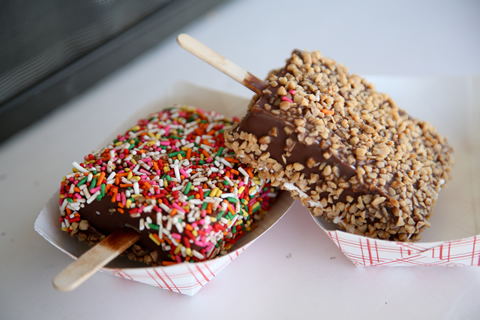 Despite the many anecdotes associated with the Balboa Bar, no one seems to be able to answer the million-dollar question—who served it first?

One thing is for sure: When it comes to what makes the Balboa Bar special, there are just as many answers as there are people on the island who love them, leading us to believe that there’s no clear winner or loser. Some, like Bob, enjoy the process that has been handed down between owners; others, like Helen, appreciate treat time because it brings happiness to the island. An element of folklore surrounds the Balboa Bar, and though many islanders are curious about who really served it first, a little mystery just adds to the allure. 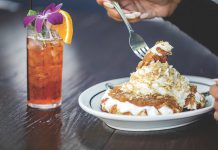 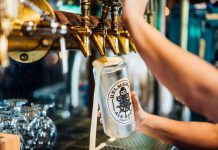 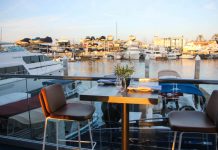