Sweat it out for charity at these gyms and fitness studios that offer fundraising events for great causes.

Working out makes you feel physically good—your endorphins are increasing, your heart is pumping and you’re taking another step toward health and wellness. But nowadays, gyms and fitness studios in Newport Beach are also making it so that working out makes you spiritually happy as well, with special events that raise money for charities and nonprofits in town and beyond.

If you’re looking to do your heart some good (in more ways than one), head to these gyms and studios and participate in one of their myriad fundraising events.

With Coach Q’s (real name: Quentin Pullen) tough-as-nails background, including serving in the U.S. Marine Corps, you know you’ll be working up a sweat at any of his boot camps, small group classes or one-on-one sessions—but now you can get your heart pumping for charity as well. The fitness instructor began hosting charity events to benefit the Newport Beach American Legion earlier this year. Coach Q notes that his charitable leanings were instilled in him at a young age while growing up in Atlanta as the son of a pastor, and further solidified during his service as a Marine.

Of his first fundraiser, Coach Q says, “We all had tons of fun, and were able to raise money, support and awareness for the veterans of this great country. We are looking forward to our next event, to get even more community support, and raise awareness not only for our veterans and the great Marine Corps organization, but to raise awareness for our planet with the hopes of generating a true love affair for our outdoor spaces.”

While the date of the next charity event has not yet been announced, Coach Q is planning a “ruck hike” (hitting the trail while carrying a backpack or “ruck sack”) with a group of Marine leaders on Nov. 11—during the Marine Corps’ birthday month—to promote health and encourage everyone to get out into nature. (714-401-0988; qthecoach.com)

“We regularly hold charitable drives at Body Design because I think it’s important to give back to my community,” says Susan Tobiessen, founder and owner of Body Design, an athletic, wellness and spa center. “I’ve been afforded so much, and am thankful for where I am, and who my clients are, as most are generous, strong women who understand the importance of paying it forward.”

In the past, Susan and her daughter, Alex Tobiessen, hosted classes in which all the proceeds went to Hoag Neurosciences Institute brain tumor program, in memory of Alex’s father, Eric Tobiessen. “… We lost my husband/Alex’s father to brain cancer last year,” Susan explains. “We want to show our community how important the Hoag Neurosciences Institute [is], and show our thanks to everyone who cared for him.”

Defy Gravity Studio, which offers Pilates, Bodhi Barre and cycling classes, regularly hosts charity-related events. Earlier this year, for example, the studio hosted one to benefit the Children’s Hospital of Orange County, with proceeds from the classes—which were priced at $40, $50 and $60, to allow guests to choose how much they want to donate—going to the hospital. There are plans to do more events, as well, based on input from members about what charities they personally support.

But for Defy Gravity, giving is certainly not new. The studio has raised $800 for CHOC in the past, in addition to an event for Keep A Breast Foundation and regularly gives away series and monthly memberships (in increments of one, three, six or 12 months) to varying charities.

One upcoming event that studio managers are excited about is the Movember Class in honor of Movember, an annual initiative in which guys grow mustaches during the month of November to raise awareness about health issues affecting men such as prostate cancer, testicular cancer and suicide. To that end, the studio will be host a Defy Gravity Split class—combining cycling and Bodhi Suspension workouts—and Purely Reformer class with donations benefiting the Movember Foundation on the evening of Nov. 13. (949-719-2900; defygravitystudio.com)

Over the summer, all of Ra Yoga’s studios collectively hosted a 90-day challenge called Ra90/Ra For a Cause. During this time, yogis were invited to choose a charity to represent, with donations going to nonprofits based on attendance by the students who signed up to represent them. Last year, based on more than 10,000 classes that were attended, Ra Yoga was able to donate over $3,000 to the selected charities. The event was so popular that it has become a tradition each summer. This year’s program raised more than $5,000, distributed among five local charities, with the help of over 300 participants.

In addition to Ra For a Cause, the Newport studio also hosts yearly food drives and donates home goods, clothing and food to charities such as Colette’s Children’s Home, Laundry Love and Step House Recovery Center. The studio has plans to host another charity event in November, although details are still being solidified. (949-612-7905; rayoga.com)

“At YogaWorks we do not only believe in helping the individuals on their personal journey toward … health and well-being, but also enriching our community,” says Samantha Spears, the studio manager at YogaWorks Newport Beach. “This is not just limited to our studio community, but local and global community as well. When there is a group in need we are inspired to help them through karma yoga, [a philosophy of selfless action].”

To that end, the Newport Beach location of popular chain YogaWorks participates in several fundraisers for various charities, supporting organizations such as Second Harvest Food Bank in OC, the Downtown Women’s Center in Los Angeles, Toys for Tots and the Corona del Mar Christmas Walk. Previous fundraiser events have also contributed money to victims of the Pulse nightclub shooting in Orlando, Fla., as well as victims of the April 2015 earthquake in Nepal. (949-640-9642; yogaworks.com)

Give to charity on your own time with these apps that make it easy to combine philanthropy and working out.

With Charity Miles, you can select one of more than 30 charities to benefit as you rack up miles walking, running, biking or otherwise going about your day. For every mile, funding from the app’s corporate sponsors will be donated to the charity of your choosing—currently, up to 10 cents a mile for biking and up to 25 cents a mile for runners and walkers. The app is available for both iPhones and Android devices. (charitymiles.org) 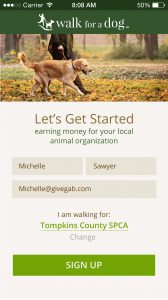 Walk for a Dog

Take Fido out for a stroll and earn money for animal-related charities as you do so with the Walk for a Dog app. Simply choose a shelter or rescue group to walk for, add the name and a photo of your dog and get walking. You can download the app for an iPhone or Android phone. (wooftrax.com)

Fitness Plus3/Fitness Rewards by Plus 3

Essentially the same app, Fitness Plus3 for Android devices and Fitness Rewards by Plus 3 for iPhone both allow you to track time spent working out and convert that into money for a charity. You can log in all sorts of activity, whether it’s running, a pickup game of basketball or a session of hot yoga. This app also has a competitive option for a company’s employees to challenge each other to do more and meet team goals. (plus3.com)