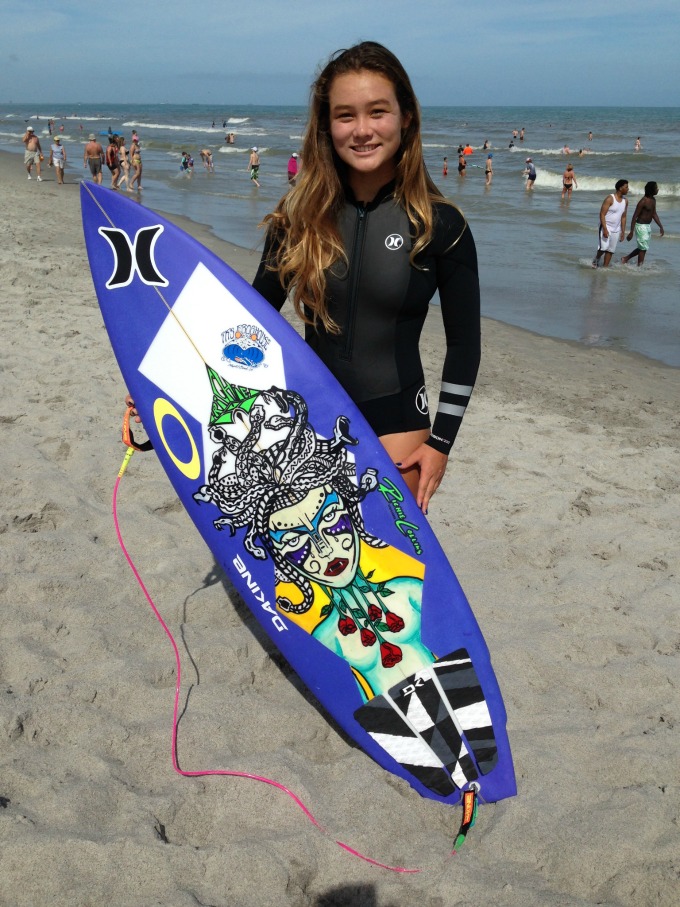 At only 16 years old, surfer Meah Collins is making a name for herself in her hometown of Orange County and beyond.

At 6:30 a.m., while others her age are typically still sleeping, 16-year-old Meah Collins is already at the beach with her gear and surfboard in tow, ready to ride the waves. With this early morning ritual, Collins is not the typical high school teen. While juggling classes at Edison High School in Huntington Beach, she’s also a competitive surfer and talented artist. Despite her winsome smile and quiet charisma, Collins has already been likened to famed surfers like Laird Hamilton.

Over the last few years, Collins has notably racked up wins in world competitions and is known for taking on larger-than-life waves; she surfed 20-foot faces at Sunset Beach in Oahu last summer. “You’re out there, and you’re a part of a force of nature. When you’re on the wave, there’s nothing like the ocean, and it’s a completely different universe compared to anything on the land,” Collins says. “Just being able to feel the force of the wave beneath your feet and your board like an extension of yourself—being able to express yourself through how you surf and your style—I can’t really get that feeling anywhere else.”

Young Prodigy
Collins’ first surfing experience took place on the North Shore of Oahu. At age 7, she had been afraid of the ocean and took a dislike to stingrays. When she saw her friends and some family members getting into the water, she decided to give surfing a try and found that she was hooked on it.

“I finally went out to the water with my uncle who was a fireman,” she says. “I guess I felt safer with him, and I surfed for maybe five hours that day. I got the worst sunburn in my life. I still remember how much it hurt, but it was the most fun ever—just wave after wave. I would come in and grab food, and then go back out on the longboard.”

A grom-in-the-making, she quickly went from learning how to stand on her feet on the board and riding a wave to practicing turns. She and her father, famed surfer Richie Collins, who was raised in Newport Beach and the son of a surfboard maker, would go out to the River Jetties in Newport Beach. There, she would practice turns over and over until she felt comfortable with the trick. Collins credits her father’s encouragement and coaching as a key to her success today.

“He’s the one I turn to for advice; all the knowledge I have today is pretty much from him,” she says, adding that she uses surfboards crafted by her father’s company, Richie Collins Surfboards in Costa Mesa.

In a typical coaching session, she first warms up her limbs with a few stretches and then takes in a few pointers from her dad. She’ll then go out in the water for some surf practice; if he has some critiques to give, he’ll reel her in to give her feedback. Apart from the work she puts in at the beach, she’ll review taped videos of her surfing competitions at home. 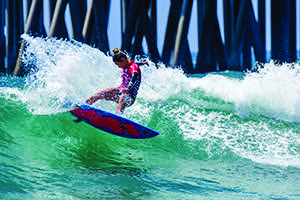 “I’ll video her heat, and when I bring the video home, [her father will] go over every part of her surfing, including how she’s paddling, maneuvering; how she’s turning; how she is leaning in the wave; her body positions; how she’s bending her knee; how her head is positioned,” says Caroline Collins, Meah’s mother. “He’ll show her where she needs to improve.”

In addition to her coaching, Meah has found other sports helpful to prepare for competitions. “Another thing that’s really helped my training is golfing,” Collins says. “Surfing is such a mental sport, and there’s so many technicalities about it. Golfing has really helped me because it gets you to focus more and concentrate on what your goal is.”

Big Waves, Big Wins
Over the years, Collins has won a number of titles, but her top accomplishment was when she won the 2014 Association of Surfing Professionals (ASP) North America title for the Women’s Junior Series—she was only 14 at the time. Another favorite competition is the Sunset Pro Junior, a World Surf League event in Sunset Beach, Oahu, where she placed second this year.

This June, she’ll be competing in the World Surf League’s Women’s Qualifying Series events in El Salvador and Los Cabos, Mexico. Other upcoming competitions include the Supergirl Pro in Oceanside, Calif., and the U.S. Open of Surfing in Huntington Beach. Through the sport, Meah has been able to meet friends from around the world, including those living as close as Hawaii or as far as Australia.

“I have a great support crew here in my hometown, but I’ve been traveling around the world since I was 11, so I’ve gotten a lot of great experiences and opportunities to meet people,” Collins explains. “Anytime I go somewhere, I meet someone new or catch up with friends from other places.” 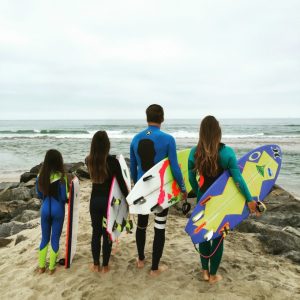 While Collins has built a strong network within the surf community, the teen surf star praises her family for where she is today. Along with her dad, Collins has the support of her mom and her younger sisters, Lylah and Anelah.

“I think one of the hardest things so far in my surfing career … is the mental blocks and struggling with self-confidence,” Collins says. “It’s difficult at times, but I have my family with me that supports me and helps me through that. Every time I’m doubting myself, or getting in a weird funk, they’re usually there to help bring me back.”

Family plays an important role in Collins’ life and journey in competitive surfing. During competitions, Caroline is on hand to help her keep her nourished and hydrated. “It’s really easy for an athlete in any sport to sometimes forget to eat or drink water,” Caroline continues. “So, I make sure she’s eating snacks throughout the day, she’s drinking lots of coconut water, making sure she’s hydrated and well-fed, because it’s really easy to lose that focus.”

Eye on the Horizon
In addition to her family, others who are well-regarded in the local surf community believe Collins has what it takes to become one of the world’s best.

“I think that she has the style, the ability and the heart to go as far as she decides she needs to go in the competitive surfing world—she could even surpass her father’s achievement,” says TK Brimer, owner of The Frog House Surf Shop in Newport Beach, which has sponsored Collins for the past four years. 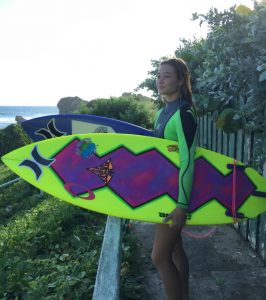 He also notes her strength and courage in facing new challenges. “I think she has a huge advantage in a trainer in her father in that he pushes her really hard in big surf, and mentally psyching her up and getting her to surf big Sunset Beach waves,” Brimer adds. “She rides waves that I won’t take off on; I won’t ride. I think that helps her out in any surf contest that features large surf. I think she has an advantage over many of her competitors.”

Caroline echoes Brimer’s statement, “Meah is probably one of the most diligent and natural athletes. [She’s] an incredible hard worker; she puts so much effort into everything that she does. She’s learned and progressed because she’s wanted it, and she doesn’t take it lightly.”

For now, Collins continues to balance school and surfing. “Surfing, right now, is my No. 1 priority, but school is also right up there with surfing,” she says. “I definitely want to pursue surfing as a career, but I am keeping school close.”

Top 5 Surf Spots to Hit This Summer
Luckily, in sunny Newport Beach, there are waves year-round, making it an ideal locale whether you’re a beginner or a veteran. Here, Meah Collins, a rising high school-aged surf star, shares her favorite local spots to hang loose.