Dining at contemporary French restaurant Knife Pleat, located in South Coast Plaza’s third-floor Penthouse, it’s clear why Michelin Guide awarded a star to the refined establishment this past fall, only two years after it opened in 2019. The setting, with curtains softly concealing the view of shops outside, feels a world apart from the mall it’s in. And everything from the cuisine to the service is perfectly planned and executed, with creativity shining through in the often-changing dishes.

In February, the restaurant—owned by husband-and-wife duo Tony Esnault and Yassmin Sarmadi—switched to a three-course prix fixe menu on Tuesday through Thursday, with a six-course tasting menu on Fridays and Saturdays; a wine pairing may be added to either. At lunch, a three-course prix fixe menu that changes almost daily and a la carte options are offered while afternoon tea is available every Saturday.

With Esnault at the helm in the kitchen and Sarmadi running the front of the house, along with a well-trained service team, dinner comes together like a dance with sauces poured tableside and a glass cloche removed at just the right moment to release swirls of smoke from an infused amuse-bouche. Every dish is intentional, from the duck brined for multiple days to the desserts featuring an array of components expertly prepared to delight the palate. It’s obvious this isn’t the couple’s first successful restaurant as they previously received acclaim for Church & State and Spring in Los Angeles.

Knife Pleat allows diners a glimpse at the process with an open kitchen and a chef’s table while a courtyard patio offers an alfresco option. Once seated, begin with a drink: With several cocktails named after famous fashion designers in a nod to Knife Pleat’s location at South Coast Plaza, try the Yves Saint Laurent with vodka, kumquat, rose water and lemon, or the Iris van Herpen with gin, shiso leaf, ume plum and lemon grass. In fact, Knife Pleat itself is named after a technique in fashion design, also called accordion pleats, which are used in skirts.

Here, the design work is more epicurean, with a focus on organic produce from the farmers market, pasture-raised meats and even house-made pickled vegetables. Prix fixe dishes come and go at the chef’s whim, but one recent standout was the Black & White Salad, which brings together many flavors and textures from crips greens like frisee, castelfranco radicchio and savoy cabbage to earthy truffle and Parmesan, sweet apple and crunchy celery and walnut. Another recent appetizer was the Dungeness crab, artistically plated and punctuated with juicy grapefruit segments, dollops of avocado-yogurt mousse, pieces of snap peas and more.

For entrees, the Champignons is a delicious barley “risotto” with a variety of mushrooms including pickled ones on top and an “elixir,” like a broth, made of the fungi that’s poured into the bowl with the risotto. The result is a hearty, savory dish—the very essence of the fifth flavor called umami—that’s both filling and satisfying. Meanwhile, the signature Crescent Farm Duck features seared breast, leg confit, pain perdu (or French toast), daikon and radish, arranged artfully with orange sauce.

For dessert, the midweek dinner lineups provide a choice while Friday and Saturday’s finale is set. If you find it on the menu, the Citrus option is a playful treat with citrus segments, blood orange sorbet, yuzu cream, marshmallow brulee and linzer sable cookies. Your taste buds will love this abstract assemblage, which ventures outside the lines in a resounding triumph. 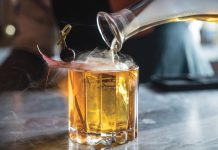 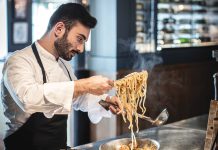