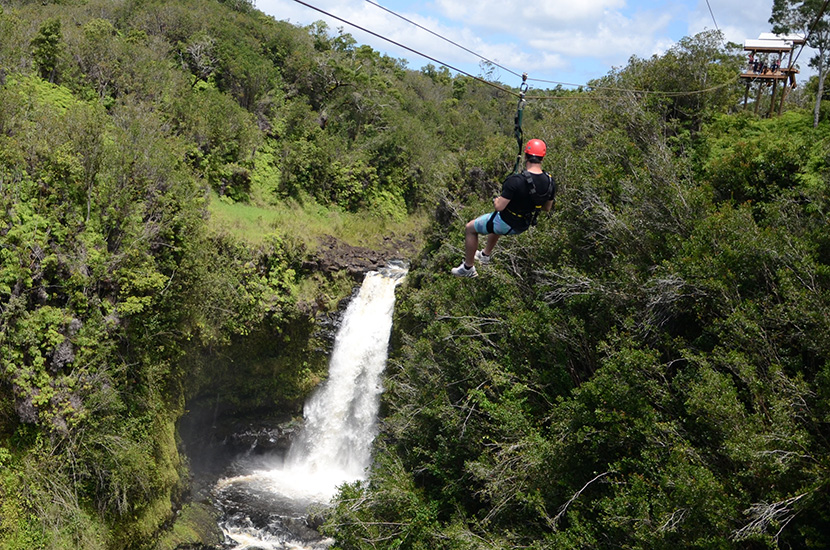 “On the count of three,” the guide says, as I inch closer to the edge of the zip line platform. Lush Hawaiian rainforest sprawls out below this section of KapohoKine Adventures’ course—at nearly half a mile in length, it is Hawaii Island’s longest riding line. “Three,” he yells, and I slowly release the safety rope overhead. Then, I leap.

Soaring over the rainforest at speeds up to 25 miles per hour: It’s an experience only to be had off the beaten path, perhaps the best way to discover all that Hawaii Island has to offer. Boasting 11 of the world’s 13 climatic zones within its shores, the largest island in the Hawaiian chain features white and black sand beaches, volcanic coastlines and overgrown jungles—a topography that lends itself to exciting excursions ranging from moderate to extreme. More than just a tropical paradise, the landscape transforms when paired with small (or large) doses of adrenaline; after all, there’s a reason they call it the “island of adventure.”

Extreme excursions can be found on the east side of Hawaii Island (known colloquially as the Big Island), where the region of Hilo offers lush rainforests and overgrown jungles. KapohoKine Adventures’ Zipline Through Paradise course is a highlight, with eight lines totaling nearly 2 miles of unparalleled views, including cascading waterfalls throughout the 200-foot river gorge below. Adding to the appeal is a “zip and dip” option to end the afternoon: A 10-minute hike through the rainforest leads to a secluded waterfall, where gushing waters offer a cool reprieve after a full day of adrenaline.

Hilo also serves as the gateway to Hawai’i Volcanoes National Park, encompassing the summits and rift zones of two of the world’s most active volcanoes, Kilauea and Mauna Loa. The park can be explored by foot, or—for a more adventurous approach—by bicycle: Tour company BikeVolcano.com offers both half- and full-day excursions spanning many of the park’s attractions.

On the full-day tour, a short introduction at Jaggar Museum starts with a look at Halemaumau Crater, where the summit eruption of Kilauea has continued nonstop since it started in 2008; by day, a dramatic plume of volcanic gas can be seen wafting from the pit. From there, cyclists coast along forest trails to Puu Oo, the volcano’s east rift zone vent that serves as a second eruption site. Then, pedal up jungle-lined hills to Nahuku (Thurston Lava Tube), where a quick pit stop includes a walk through the tunnel; and accelerate down the twists and turns of Crater Rim Drive en route to Pauahi Crater. In total, the tour is 15 miles before a van transports cyclists to the end of Chain of Craters Road for a stunning view of the Holei Sea Arch on the Kau coastline.

Be sure to make time for the renowned Halemaumau glow during your visit to the park, as the lava lake within the crater casts its reflective radiance on the clouds above during nighttime hours. With nearly 5,000 people entering the park every day, Jaggar Museum becomes the most popular place on the property after 5:30 p.m. as visitors clamor for a look after sunset. However, Hawai’i Volcanoes National Park public affairs specialist Jessica Ferracane suggests observing the phenomenon in the early mornings, as you will likely have the glow to yourself if you arrive before 5 a.m.

Just don’t take any lava rocks from Kilauea during your time in the park, as Hawaiian legend says you’ll be cursed for the rest of your life if you do. The volcano goddess, Pele, lives in the mountain, and consequences are in order for anyone who takes a piece of her away.

More moderate explorations can be found along the Kohala Coast in the west, where craggy, lava-ridden shoreline meets some of the island’s best beaches, resorts and golf courses. Marine life abounds in the crystal clear waters that hug the shoreline: Schools of raccoon butterflyfish and yellow tang swim alongside honu (green sea turtles) in the colorful reefs and offer snorkelers an underwater adventure filled with colorful aquatic sights. For those with their own gear, a honu cleaning station—where turtles congregate to be cleaned by fish—can be found just off Puako; access the reef through the path located across from Ascension Mission church.

Alternatively, visitors can up the ante with a sail out to the site—tour company Kohala Sail & Sea visits the Puako reef on its morning snorkel. Helmed by Capt. Steve Turner, the three-and-a-half-hour excursion not only features a dip in the water but also a relaxing sail through the Hawaiian Islands Humpback Whale National Marine Sanctuary waters. Trade winds fill the sails of Riva, a 34-foot islander sloop, as Turner searches the seas for spinner and bottlenose dolphins, while humpback whales can be spotted during the winter. With stories that span four trips across the Pacific Ocean, the captain’s depth of knowledge only adds to the allure of the experience—he once swam with a 30-foot-long whale shark and worked as a skipper on Kevin Costner’s 1995 action film “Waterworld” when it was filmed off the coast of Kawaihae.

But adventures aren’t over when Turner takes down the sails. One of his on-board snorkel instructors, Alice Thigpen, is also a guide on manta ray scuba dives offered by tour company Blue Wilderness Dive Adventures several nights per week. Twenty-three feet below the surface, divers circle around a box of underwater lights while also holding their own illuminations—the brightness attracts plankton, which can entice manta rays to the area to feed.

Alternatively, a 40-minute drive to the north Kohala coastline takes visitors to Pololu Valley lookout. A small parking lot at the end of the highway allows for easy aerial observation of the lush gorge below, but bring your hiking shoes for a more extreme thrill—a 20-minute trek down the mountain leads to even more breathtaking panoramas. While the switchbacks are fairly painless on the way down, the return climb can be strenuous; however, the peaceful quiet found on the black sand beach at the bottom is worth the exertion. Enjoy the view from the beach, as swimming is discouraged due to strong currents.

Rivaling Pololu Valley for picturesque views is Waipio Valley, located on the Hamakua coast and easily accessible to those looking for a low-key adventure. All it takes is a short flight of stairs to reach the overlook at the end of the Hamakua Heritage Corridor drive that offers sweeping views of the lush area known as the “valley of the kings.” Boasting 2,000-foot-high cliffs and the Big Island’s tallest waterfall, Hiilawe Falls, the region served as King Kamehameha I’s boyhood home and now houses less than 100 residents amid taro fields and rivers.

Farther south, Hualalai Volcano rises above the Kohala Coast—it’s the third most active of the five volcanoes that make up the Big Island. Because many travelers tend to book their stays on the western shoreline, the volcano offers a nearby look at craters and fissures if you don’t have time to travel east to Hawai’i Volcanoes National Park.

To see the natural wonders of Hualalai, however, you have to be a bit adventurous: Off-roading is one of the only ways to get to the top.
With exclusive tour access to the privately owned lands that make up the volcano’s northwest rift, Hawaii Forest & Trail offers excursions that provide just the right amount of adrenaline rush for the casual traveler. A 16-seater bus bounces over hundreds of years of volcanic cinder as it climbs to Kaupulehu Crater, the source of Hualalai’s 1800 eruption. Visitors hike to the mouth of a decrepit lava tube and peer over the cliff of a massive fissure shrouded in Hawaiian legend. Some locals say the volcano goddess, Pele, disguised herself as a sickly woman and ventured into a town at the volcano’s base only to be ignored by all but two small keiki (children)—their help instantly transformed her and, in return, she spared their home when the eruption destroyed the town in her retaliation. To observe the site of the lava wall that rose up in her fury, reserve a spot on the morning tour, as afternoon fogs can hinder panoramic views of the rift.
The highlight of the trip, however, is a stop made halfway back down the mountain in the Kona Coffee Belt. Nourished by rich, volcanic soil and constant afternoon showers, the narrow region produces Kona coffee, some of the most sought after and expensive java in the world. Brew samples are served at Mountain Thunder Coffee Plantation before a tour of the property offers insight into the family-owned farm’s process: Red coffee cherries are hand-picked and meticulously sorted before being roasted and packaged on-site.

And while bags can be bought at the plantation’s shop, you’ll walk away from the excursion with more than just souvenirs: One trip to the Big Island and you’ll be replete with enough adrenaline to last you until the next thrill. So enjoy exploring the nooks and crannies of this tropical haven—head off the beaten path to discover the array of hidden gems that lie within its shores. More often than not, all it takes is a bit of adventure to savor all its splendor. NBM 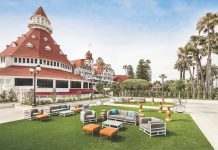