When Newport Beach’s Lido House opened, locals were abuzz. Not only did the property house the city’s first rooftop bar, it was also the first boutique hotel on the peninsula. Its signature restaurant, Mayor’s Table Pacific Pub & Kitchen, opened to much fanfare, thanks to the apt nautical-inspired decor as well as a selection of innovative dishes, from the Dungeness crab-stuffed doughnuts and deconstructed Bonfire S’more dessert to the Champagne and chicken sandwich combo.

Now, a little over a year later, the eatery has become a hot spot for locals and visitors alike, offering seasonal menus for breakfast, brunch, lunch and dinner daily. However, it’s the chef’s counter experience, launched in June, that has the town talking.

This culinary journey is ever changing, but that only adds to the magic. For the first three months, Janine Falvo, the executive chef, and Riley Huddleston, an executive chef-partner, crafted innovative and inspired tastes. Offered on Thursday nights, as many as six guests could dine at the countertop overlooking Mayor’s Table’s exhibition kitchen as the chefs and their staff prepared and plated the meal. With between seven and 12 courses—and a different menu each night—there was something for everyone.

Now, after testing the concept and playing with different types of dishes, the eatery plans to expand the project with a full-on Chef’s Table, allowing for even more guests to enjoy the experience. As we move into fall, the menus will be tailored to monthly themes, with September focusing on bites focused around Veuve Clicquot Champagne. Then, in October and November, the chefs will craft dishes inspired by the fall harvest, complete with various wine pairings.

The menu will still change nightly, so expect to be awed by a whole new set of dishes, but let us take you through our one-of-a-kind experience.

Thoughtful touches are all around during these special, chef-centric dinners. Ours kicked off with a welcome glass of Champagne, which Huddleston ventures to France every year to help create. This special Lido House wine even has a label with the silhouette of the hotel and the chef’s signature on it.

As we sipped our bubbly through the first few courses, we enjoy a pre-meal snack, consisting of a beet chip, followed by the first course, an amuse-bouche of uni, crab, corn and macadamia nuts. Served inside the urchin’s spiky half shell with a piece of crispy chicken skin for “dessert,” the second bite with the poultry added a different, nuanced flavor to the dish.

Next up was one of the more unique presentations of the evening—Yukon salmon and smoked trout roe served in a small fishing basket. The basket, too, was smoked to enhance that distinct flavor even further, and the salmon was placed on a bed of creme fraiche.

As we enjoyed the third course, a house-made focaccia bread served alongside a sauce made from peas, Tucky Bandaranaike, the restaurant’s bar manager, crafted a cocktail that he called “a garden in a glass.” He strained a mixture of gin, creme de violette and St-Germain over an ice ball, with aromatics—including tarragon and thyme—both below and above the ice. Sliced plums and orange blossom flowers topped the drink off. Edible gold paint on the glass offered an extra element that just made the cocktail even more beautiful.

Our fourth course, which the chefs called Textures of Tomatoes, featured a seemingly endless number of different types of tomatoes prepared in different ways. From dehydrated versions and tomato tartare to confit tomatoes, a tomato cake and fried green varieties, it mixed taste and texture throughout.

Continuing on, an iridescent red abalone shell from the Monterey area of California’s central coast featured sous vide abalone blended with fermented chili hot sauce and onion confit. Bandaranaike paired it with a white chenin blanc, using the dry acidity of the wine to complement the seafood. Then, as we transitioned from sea to land, we cleansed our palette with an intermezzo of fresh melon, edible flowers and tiny pieces of chili.

When it came to the seventh course, a rack of lamb slow-cooked with heirloom squashes and sous vide eggplant, – offered a cabernet sauvignon that accented the flavor of the meat.

After we finished the lamb, we were left with two more courses: cheese and dessert. The first, a baked pastry filled with wine-aged cheddar and surrounded by blackberry jam with a hint of chili, was the perfect end to the meal, really. But the chefs prepared something truly special for dessert—a unique peach-shaped semifreddo, complete with crispy brown “pebbles” meant to mimic the orchard floor. This cold, mousse-like treat was covered in a layer of orange and a mint leaf to give it a realistic effect. And, of course, – was on hand to offer up a matching cocktail, crafted with peach and lychee liqueurs, sweet vermouth, yuzu and flash-frozen berries as well as liquid nitrogen.

After each of the nine courses were through, the chefs came to thank us, still offering delectable chocolate macarons with olive oil white chocolate ganache inside—as if we hadn’t had our fill of delicious dishes that night.

When the new Chef’s Table launches this September, dates may range from once a week to once a month. Keep an eye on the restaurant’s website for more information or make reservations through its Tock page. 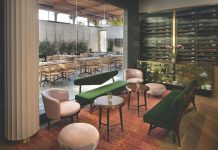