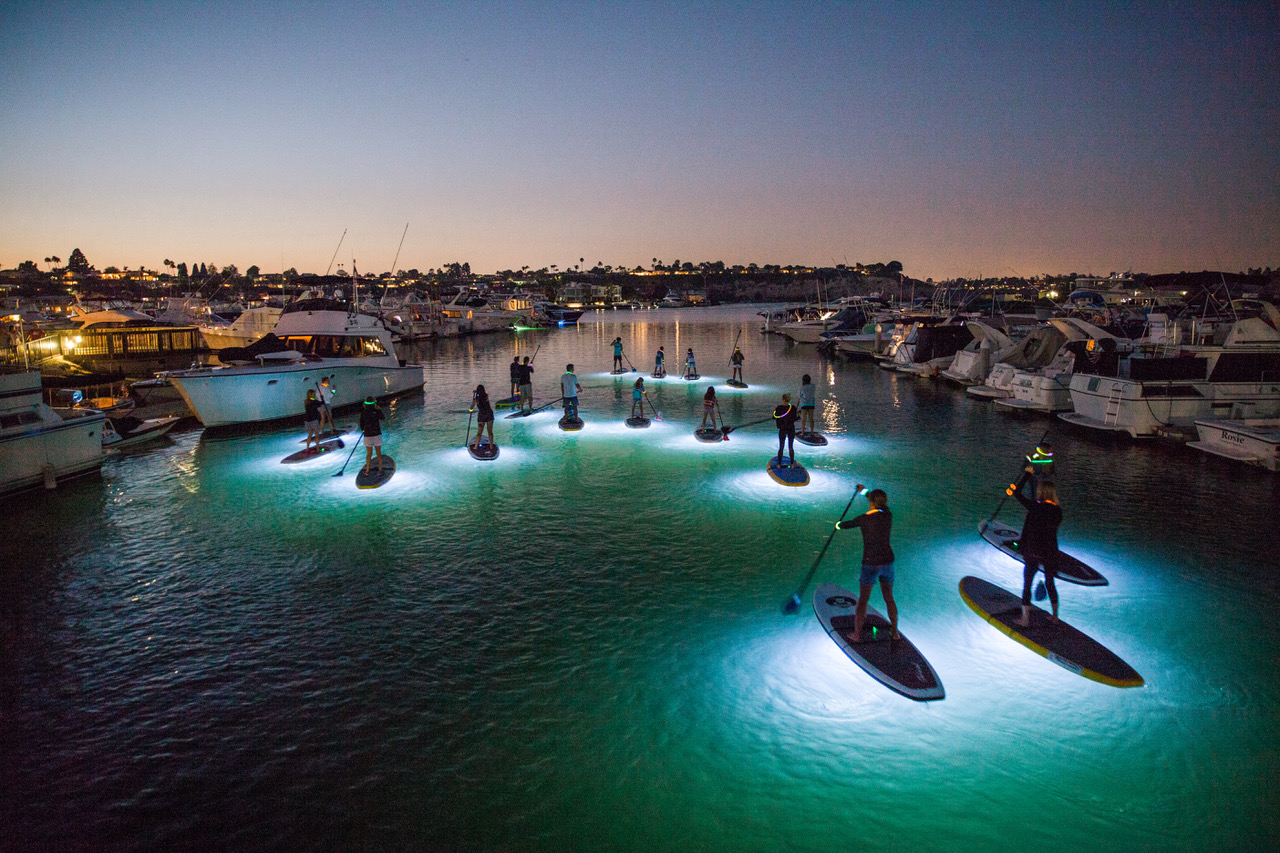 This unique, nighttime tour provides an illuminated view of the Back Bay, via stand-up paddleboard.

While stand-up paddleboarding is now a common activity off the coast, it’s not too often that the sport is attempted in the darkness of night, not to mention with a glowing board. But one Newport Beach business, Pirate Coast Paddle Co., offers just that: nighttime SUP tours on boards equipped with LED lights that illuminate the water around them. Participants also wear glow sticks, adding to the luminescence.

The popular glow tours—which tend to sell out and attract paddlers from around the world—depart from Newport Dunes Waterfront Resort & Marina and traverse the Back Bay’s calm waters for about an hour on Friday and Saturday nights from June through September (sometimes extended into the fall if the weather stays nice). While a brief refresher lesson is offered on land before setting out, the tour is not for beginners; participants should have a firm grasp of paddling while staying upright on the board without falling into the water.

This unique experience is just part of Pirate Coast’s offerings, which include kayak and SUP rentals, SUP lessons, kids camps and group events. Started in 2009 at Newport Aquatic Center before moving to its current home at Newport Dunes, Pirate Coast is run by founder Mark Oehlman, who was formerly a firefighter and professional soccer player, and Tim Lukei, who is also a pastor at Mariners Church, with a full team of guides and instructors all dedicated to safety and creating a fun experience. Oehlman also recently opened Lido Paddle Sports, which offers SUP and kayak rentals and SUP lessons, on the peninsula near the bridge across to Lido Isle.

Here, Oehlman talks about the glow tour’s appeal and the fitness aspect of paddling, an added bonus of cruising the water and seeing the sights.

It’s just a really … calm, fun experience. There’s nothing like it. Everyone’s together. It’s 20 people in a tour [and] it’s guided by three to five instructors. They all stay together, so everyone’s board’s glowing together and it’s just kind of one big glow. … You’re not going to see a bunch of animals or anything like that. It’s more just the glow experience. … You might see some little fish or the occasional stingray, but I wouldn’t come on it if you’re expecting to see a bunch of animals.

From an exercise perspective, what kind of workout might you get?

Paddling’s a great workout. It’s a full-body workout once you get the technique down. So when I’m doing private lessons with people and we want to work on technique, I’m teaching them how to engage everything: legs, core, back. You’re not using a ton of arms. You’re trying to use most of your body. Your arms are your small muscles, so when you’re going miles and miles, you want to try to use these larger muscles. You should get a full-body workout because you’re standing in a little squat the whole time. You’re using some legs. … But if you really get into the technique of it, you should use everything.

How did you get into SUP?

The sport started in Hawaii probably around 2007 or 2008 and I was over there and I saw a couple guys paddling and I had never seen it either. And I got back here and I was actually managing a surf shop in Laguna Beach, Costa Azul. And the owner of the shop actually had a board and I took it out paddling in Laguna and I fell in love with it. … Every time I would paddle out here, someone would ask me what it was and where they could do it. And I said, “Nowhere, and I’ll take you tomorrow for 20 bucks.” And I was making a little bit of money on the side. I was a fireman at the time. And the lightbulb just kind of went off and I started with 10 boards and paddles over at the NAC.

What type of gear do people need for the nighttime tour?

It’s going to depend on the weather that day, but … women usually like wearing the yoga kind of pants [and] light sweatshirts. Guys, just bathing suits and long sleeves. When it gets warm, maybe it’s just T-shirts. Most people bring towels and maybe a change of clothes in their car in case you fall in, you can have something warm to change into. … Almost 100 percent of people go barefoot, but we do have people that wear some type of water shoe and that’s fine because there can be sharp rocks in the area or sharp shells, … but I’ve always just gone barefoot. 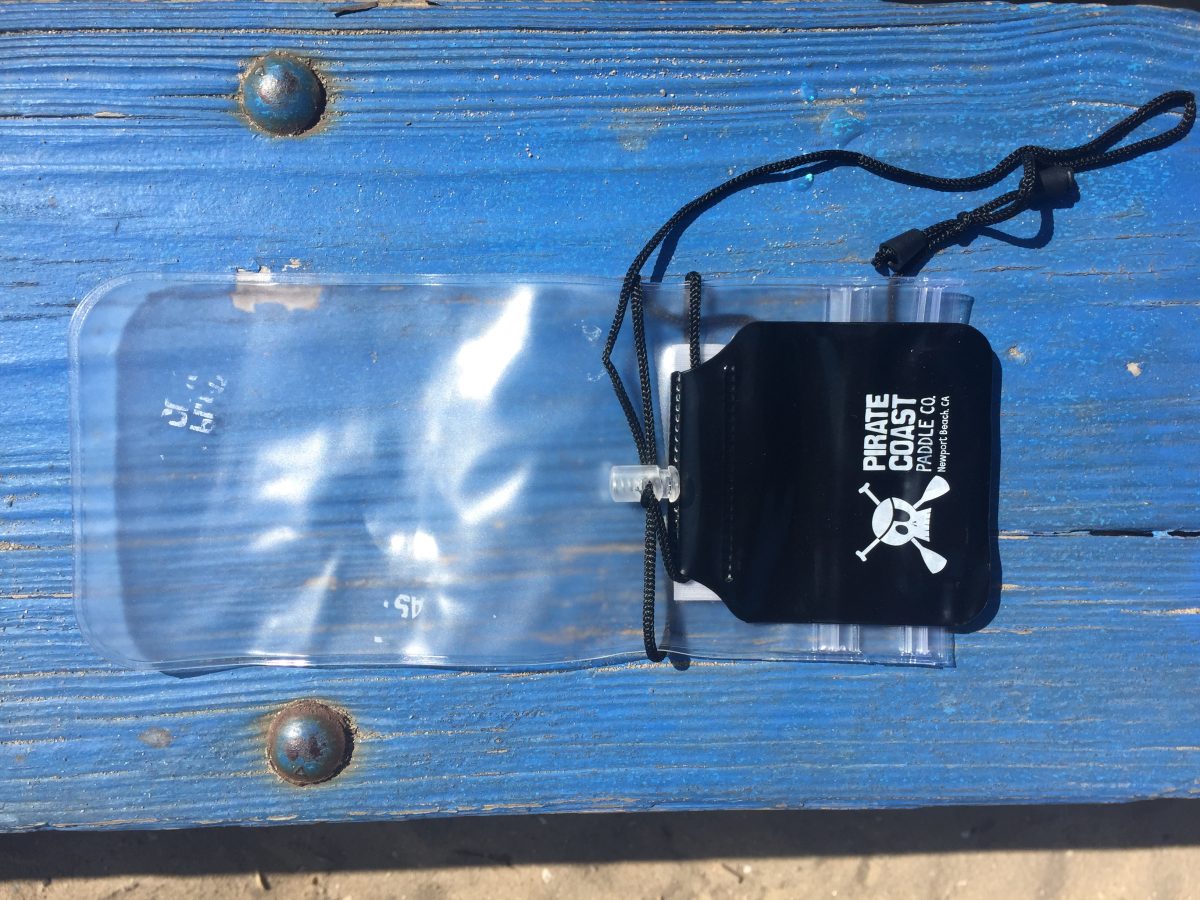 Keep your cellphone dry with this WATERPROOF POUCH—complete with a handy strap for wearing around your neck—to capture photos of the glow experience for posting to social media later, $10, at Pirate Coast Paddle Co.’s meeting site at Newport Dunes Waterfront Resort & Marina. (949-278-0011; piratecoastpaddle.com) 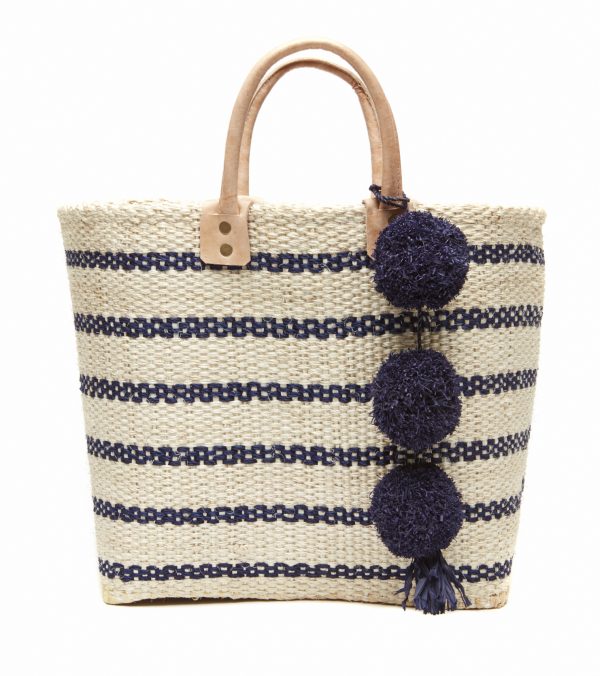 Crafted by artisans through fair trade partnerships, the Mar Y Sol WOVEN BASKET TYBEE TOTE made with sisal and sea grass is stylish with navy stripes and raffia pompoms, yet practical and just big enough to stash a towel and a few essentials for post-SUP tour, $XX, at Faherty, Lido Marina Village. (949-612-7146; fahertybrand.com) 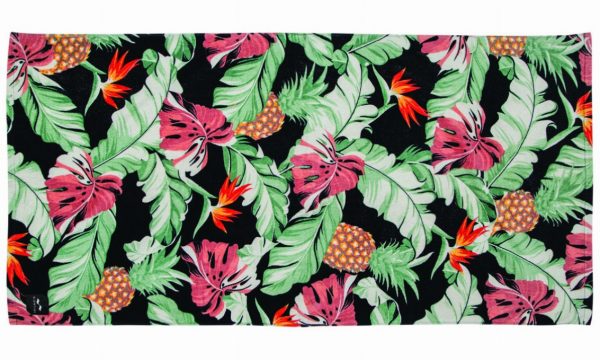 Dry off with this soft, 2.5- by 5-foot Slowtide MAKAI TOWEL with a summery design including pineapples, palm leaves and birds of paradise, $30, at Hobie Surf Shop, Corona del Mar. (949-706-8090; hobiesurfshop.com) 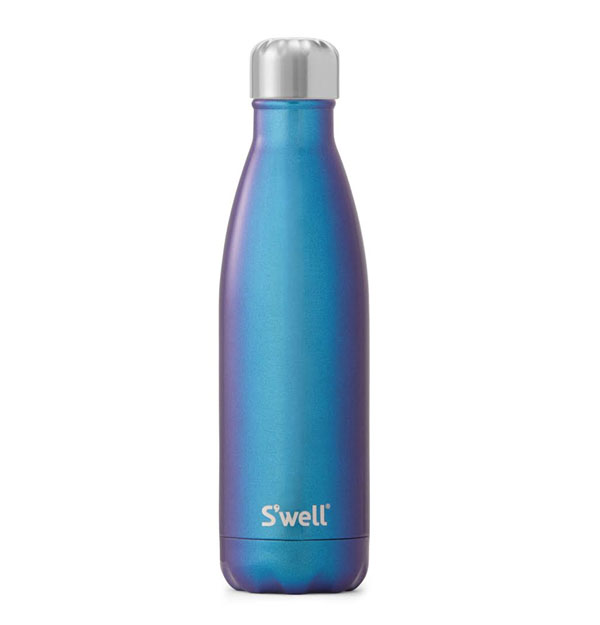 To rehydrate after paddling around, the 17-ounce, vacuum-sealed S’well NEPTUNE BOTTLE will keep your water or other drink cold for 24 hours—beverages like coffee will also stay hot for 12 hours—with a stylish design with metallic blue tones reminiscent of the sea, $35, at Bloomingdale’s, Fashion Island. (949-729-6600; bloomingdales.com)