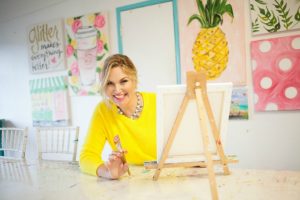 Artist Timree Gold paints a picture of her perfect day in Newport Beach.

Success came easily to Timree Gold. Shortly after starting a business out of her apartment while she was in college, Gold began amassing a worldwide fan base. Since her first venture painting custom dishes, she now has a studio in the heart of Newport Beach, which has become a hub for celebrities, tourists and locals alike looking to indulge their artistic impulses—she teaches classes in her stylized approach called the Timree Technique—as well as a partnership with IG Design Group (formerly International Greetings), which has placed her work in Michaels craft stores across the country.

In recent months, she celebrated the release of her fall line at Michaels, which included paper plates and napkins, among other items, all designed by Gold, as well as the expansion of her studio. The artist’s holiday line with Michaels, called Gifts for Her, features smaller gifts like wine glasses and perfect stocking stuffers like cosmetic bags. Gold is also relaunching her e-commerce site to allow online shoppers to customize the wares they purchase, including ornaments and plates designed especially for the holidays.

Gold’s studio, which is located near Hoag Hospital Newport Beach, is a point of pride for the artist. “I like to say when you walk in, it’s almost like you’re in an artist’s dream,” Gold says. “It’s super colorful [and] there’s glitter everywhere. It kind of has this cool, funky vibe inside.”

Below, Gold—who was born and raised in Newport Beach, and whose family still calls the area home—shares the places she finds most inspiring around Newport, as well as her favorite spots around the city for both herself and her 3-year-old son and newborn.

“If I had to go on a date, I would probably pick The Dock. I’m … really big … [on] ambience, so [I like] anything interesting outside by the bay, with the light and food and wine. And it’s kind of smaller and more intimate.”

“Definitely our go-to is the new … [Marina] Park on the peninsula. We love it there. I’m there almost once a week. … We’ll have breakfast there at the Lighthouse [Bayview] Café and the two boys will just kind of play at the beach and at the park. We might also put up a picnic on the grass.”

Balboa Island for its Balboa Bars, Balboa Candy shop and “traditional, all-American Newport style.” Aside from Balboa Island, for Gold there’s no other place like her studio when it comes to inspiration.

“My weekend routine would honestly be going to breakfast at … [Rose Bakery Café in Corona del Mar] and taking a little walk with the boys and then coming back and teaching a painting class at the studio.”

For those who have never been to Newport, Gold suggests a Duffy boat ride “because that’s the best view of Newport.” Also on board? A bottle of wine, of course.