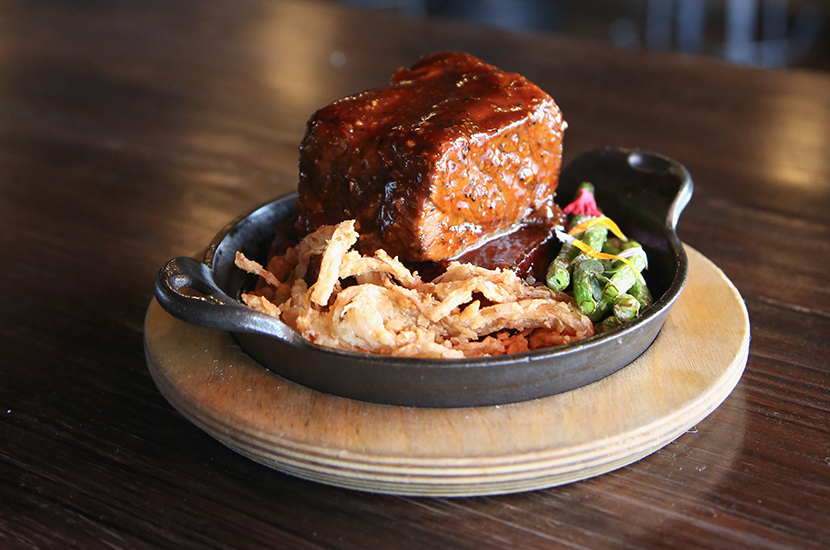 Despite Newport Beach’s proximity to the ocean, short ribs are stealing the spotlight from seafood at many local eateries. Their recent rise in popularity comes as no surprise: The hours spent slowly braising the ribs on low heat certainly pay off when the fat and collagen break down and melt together to create a juicy texture, rendering its own viscous sauce. The tender and flavorful meat slides off the bone with no need for a knife.

“They’re very rich and they’re very decadent,” says Emily Corliss, a personal chef for the Orange County and Los Angeles areas. “It almost feels like special occasion food [because] they have such a unique texture and flavor.”

Corliss also attests to the popularity of short ribs for both chefs and customers alike. For chefs, they must consider the constraints of working within the framework of a restaurant, like balancing a menu of other dishes. Since short ribs are braised either the day or night before, cooking time is minimal once a customer orders the dish. “There’s not a lot of labor involved in making them … and it keeps well because it [has been braised],” Corliss says.

Aside from the low reheating time, restaurants also include short ribs on their menus to cater to the palates of their customers. Despite popular diets and eating habits, there is still a high demand for rich, savory foods like ribs. “People really want meat and potatoes,” Corliss adds. “They’re into more hearty, substantial meals.”

Although the rich meat is undoubtedly comforting during the colder months, its flexibility allows it to grace the menus of restaurants during the springtime and into the summer as well. From Italian to Korean cuisines, these ribs have been adapted and infused with the flavors of different cultures to create uniquely delectable dishes.

“It’s a very versatile cut. The basic principles of cooking a short rib include finding some form of liquid and braising the meat until it’s falling apart,” Corliss says. “And then, as far as which liquid and which vegetables, you can really target that to reflect a certain cuisine. There [are] so many different ways to interpret it. It’s almost like a blank canvas.”

Newport Beach restaurants are taking advantage of the versatility of short ribs with their own approach to this savory meat. Here are four unique dishes that will satisfy your protein cravings. 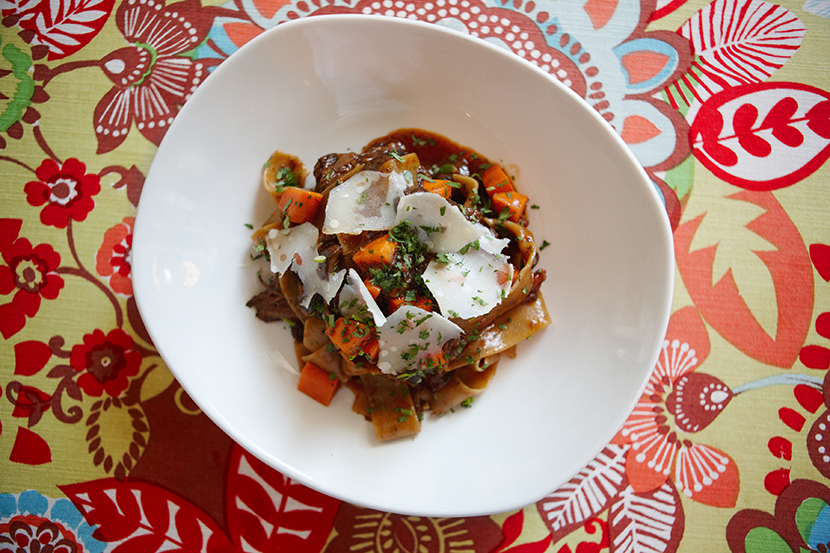 Pasta With a Twist

Inspired by the flavors and techniques of Italy, Cucina Enoteca stays true to its roots and incorporates short ribs into a hearty pasta dish. A menu mainstay, the short rib pappardelle remains one of the signature dishes across all four Southern California locations. To make the entree, the certified Angus beef ribs are first slowly braised overnight for 12 hours in veal stock and a ruby port red wine. The meat is then removed from the liquid mixture before the braising liquid is reduced and thickened.

Once cooled, the short ribs are paired with wide, flat pasta noodles called pappardelle, which are made in-house. Rather than becoming overwhelmed by the ribs, the broad body of the noodles purposely balances out the meat and rounds out the dish. Finally, roasted cremini mushrooms, carrots and Parmigiano-Reggiano are added to complement the soft noodles and tender ribs. (949-706-1416)

Don’t let the name deceive you: The new menu at The Ritz Prime Seafood includes dishes outside of the ocean. The American wagyu short ribs give a whole new meaning to a simplistic meat-and-potato kind of meal. Wagyu beef—arguably some of the finest beef in the world—is intensely marbled with soft fats, giving it a distinctly rich and tender flavor that makes this beef highly desirable. In addition to the innate flavor of the marbling, this classic dish begins with the slow braising of the ribs for three hours with aromatics, veal stock and red wine. The braising liquid is then carefully reduced to create a rich, flavorful demi-glace, or “half-glaze,” ideal for drizzling over the meat. The short ribs are also served with cipollini onions, a sweeter and smaller variety of onion, and smoothly whipped Yukon Gold mashed potatoes. Though simple and undeniably classic, these short ribs are the perfect meal to pair with an ocean view. (949-720-1800)

Although recognized for a dedication to whiskey, Bosscat Kitchen & Libations’ Southern-inspired menu hardly gets overlooked. Among an array of comfort food, the 12-hour beef short rib remains one of Bosscat’s most popular entrees. Before it closes for the night, the cooking process for the boneless short ribs starts by braising the meat overnight for a minimum of 12 hours. After the ribs are braised with a mix of vegetables, herbs and red wine, the sauce is made primarily from black pepper and garlic. But the defining feature that sets these short ribs apart is their Asian flair. The black pepper sauce is not complete without a special ingredient: dark soy sauce. Keeping with the menu’s Southern comfort theme, the ribs are also served alongside potato gratin and crispy onions to add different textures and complement the tender meat. Acting as a satisfying alternative to Bosscat’s notable burgers, these ribs will live up to any beef cravings. (949-333-0917) 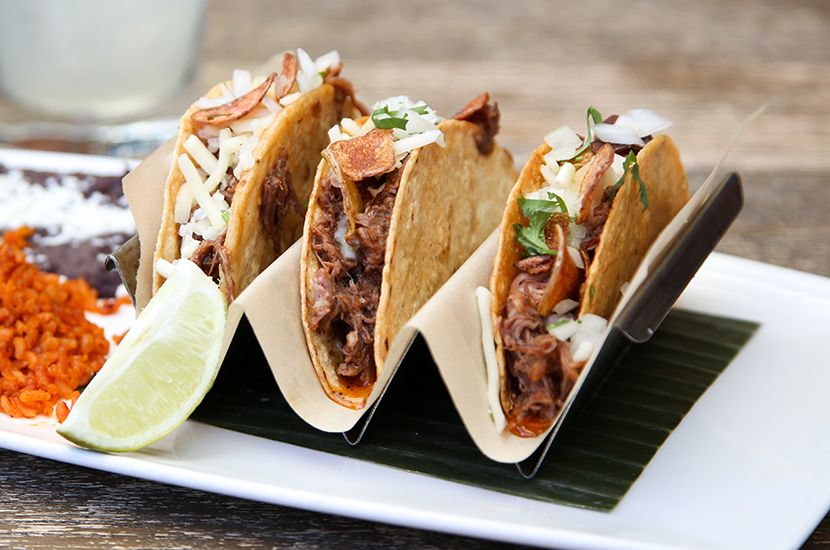 Step into the Mexican oasis that is Red O for delectable dishes and drinks to match its opulent interior design. While Red O features short ribs in many variations on its menu, the braised beef short rib tacos are an upscale twist on the Mexican staple. The ribs are seared and braised the day before for about four hours. Once ordered by a guest, the meat is reheated and then cradled in homemade corn tortillas—served soft during happy hour and crispy for lunch—trapping all of the rib’s flavorful juices. For those who like a fiery bite, a roasted tomato-serrano sauce accompanies these short ribs and packs a kick courtesy of the fresh serrano chilies. Finally, the tacos are colorfully garnished with Monterey Jack cheese, cilantro, onion, lime and radishes. Not complete without the classic side dishes, Mexican red rice and black beans accompany the three tacos. (949-718-0300) NBM