Presenting more than 100 concerts each year, the Pacific Symphony Orchestra is the largest orchestra formed in the United States in the last 40 years. 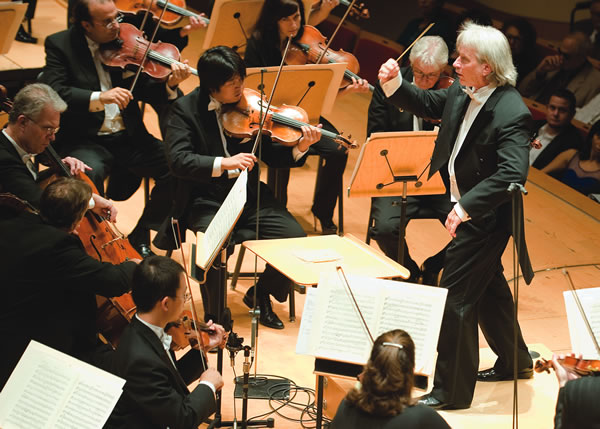 On the cusp of celebrating its 35th anniversary, the Pacific Symphony has made strides in both the national and international scene, as well as in its own community. 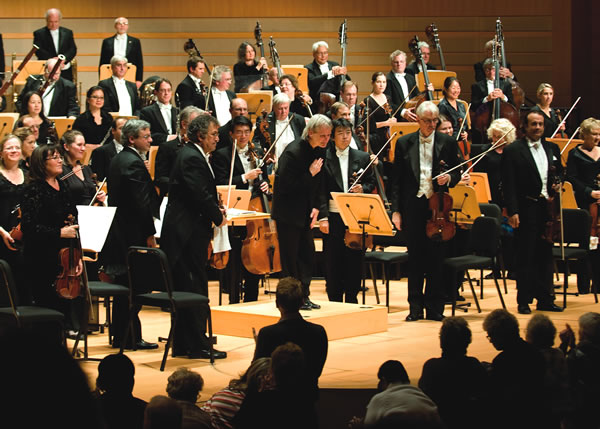 “Orange County and the Pacific Symphony have been developing and maturing and growing together—as though we met at a very early age and we sort of came into maturity at the same time so that we’re literally walking hand in hand,” says Music Director Carl St.Clair, who marks his 23rd season with the Pacific Symphony this year. “With our ability to provide and the community’s ability to support and embrace and institutionalize the Pacific Symphony Orchestra, we have a mutual relationship which is very, very important as we grow and develop further.”

In addition to its concert performances, the Pacific Symphony also conducts and participates in an array of award-winning education and community programs, and reaches more than 275,000 Southern California residents ranging from children to senior citizens. In 2006, the Pacific Symphony Orchestra embarked on its first European tour, performing in nine cities in three countries. That same year, the Renée and Henry Segerstrom Concert Hall became home to the Pacific Symphony. “When we opened the hall in 2006, it was a great gift not only to the Pacific Symphony, but to the community,” says Carl. “I think it’s really changed the orchestra’s relationship to the art form to its own membership, but it’s also created a stronger and more telling and potent bond with our audience.”

Founded in 1978, the symphony started as a collaboration between California State University, Fullerton and north Orange County community leaders led by Marcy Mulville. Then called the Fullerton Chamber Orchestra, the symphony started off performing at Fullerton’s Plummer Auditorium under orchestra conductor Keith Clark. To accommodate the expanding size of the Pacific Symphony Orchestra and its audience, the symphony performed at various venues before finding its permanent home. In 1986, the symphony made its final move to the new Orange County Performing Arts Center, and in 1987 the Verizon Wireless Amphitheater became the organization’s summer residence.

“We have a music director that is now the longest standing, most long-tenured American conductor occupying a major American symphony orchestra; we are very proud of that,” says Pacific Symphony President John Forsyte, of Carl, who took over as music director in 1990.  John Forsyte has led the Pacific Symphony as president for 15 years this spring, and works to continue expanding the organization’s community engagement efforts. “With our 35th anniversary season coming up, we are really reflecting on how much has been achieved in, really, one generation,” John says. “It’s a real reflection of the unique energy and ambition of the leadership in Orange County.”

Today, ticket revenue only covers about 40 percent of the total operating costs of the symphony, and for remaining costs, the organization heavily relies on thousands of individual contributors. One of the symphony’s goals is to continue to strengthen its relationship with the community and improve accessibility. Many concertgoers attend concerts for free, or are able to purchase discounted tickets. For more information, visit pacificsymphony.org.

“The Brilliance of Brahms”

A tribute to Johannes Brahms, starting with “Sonata No. 1,” continues with six reflective and introspective pieces of solo piano and finishes with a sextet of poise and panache.

Part of Pacific Symphony’s Family Musical Mornings, families with children ages 5 to 11 are welcomed to enjoy music inspired by the sea from Disney’s “The Little Mermaid” and Debussy’s “La Mer.”

“Singin’ In The Rain”

The Pacific Symphony performs the score to the 1952 American musical.

Presenting the works composed by Duke Ellington, a major figure in the history of jazz, the ensemble that carries his name performs some of his greatest hits as it carries on his legacy.

“The Rite of Spring”

The Pacific Symphony celebrates the 100th birthday of Igor Stravinsky’s “The Rite of Spring.” On Saturday June 8, catch a free, live simulcast of the symphony’s performance outside the concert hall beginning at 8 p.m. 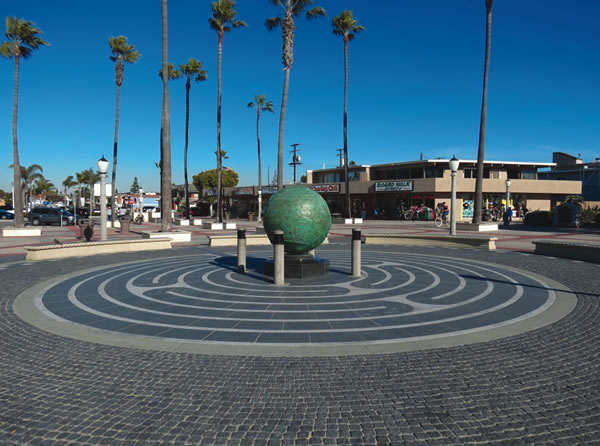 Five years ago the McFadden Square Centennial Legacy Project was revealed to the Newport Beach community. A symbolic sphere sculpture, which was created by sculptor Hank Kaminsky, sits in the center of a paved landscape designed by Ray Price, both decorated with images and captions conveying the city’s past and present.

The city celebrated its centennial in 2006, and thanks to donations, the McFadden Square Centennial Legacy Project was unveiled in 2008. The project includes granite benches and a spiral-walking path marked with significant events from the past 100 years that leads to the project’s focal point—the sphere. “It was more than an artistic process,” Hank says. “It was more of what I call an ethnographic.”

After spending a week in Newport Beach researching the city’s past by gathering photos and talking with residents, the sculptor spent four months creating the sphere. Like in many of his other works, Hank shows his ability to study a community and transform its past and present into a work of art.

“In terms of whether or not the sculpture would be useful to the people of Newport Beach was the main criteria,” Hank says. “I think because of its nature and its placement, it fits the use of Newport Beach. People enjoy the sculpture and that’s fulfilling my mission.” Visit this special place to admire the sphere located in McFadden Square, at the beginning of the Newport Pier.

Through June 6, The Irvine Museum, Irvine

The Irvine Museum celebrates its 20th anniversary with “Lasting Impressions: Twenty Years of The Irvine Museum,” an exhibit that features many of the museum’s most popular and significant California impressionist paintings. The exhibit continues through June 6, and includes works by Franz A. Bischoff, George Brandriff and many others. (949-476-0294; irvinemuseum.org)

The photographs of George Hurrell (1904 – 1992), who is known as the “Grand Seigneur of the Hollywood Portrait,” will be on display this spring at the Laguna Art Museum through April 28. The “Laguna to Hollywood” exhibit features about 40 photographs taken by the glamour photographer who captured the lifestyle of early Laguna Beach artists and Hollywood stars. (949-494-8971; lagunaartmuseum.org)

The Orange County Museum of Art invites you to attend the Visionaries Lecture Series during the spring session, which focuses on the history of photography. Jeanne Willette, Ph.D., an associate professor of art history at Otis College of Art and Design in Los Angeles, will be speaking Mondays, March 25 through April 29, at 1:30 p.m. (949-759-1122; ocma.net)

Arts Orange County invites you to the fourth annual Creative Edge Lecture on April 10 at 10 a.m., at Segerstrom Concert Hall. Featured speaker and IDEO General Manager Tom Kelley will speak about “The Art of Innovation,” with a focus on the recipe for successful innovation. (714-556-5160; artsoc.org)

Broadway legend Barbara Cook returns to Segerstrom Center to celebrate her 85th birthday with a performance on April 13 at 8 p.m. For more than 50 years, Barbara’s charisma, charm and talent have entertained audiences around the world, and for this special occasion, she will remain onstage following the concert to answer questions that have been submitted via Facebook and Twitter. (714- 556-2787; scfta.org) 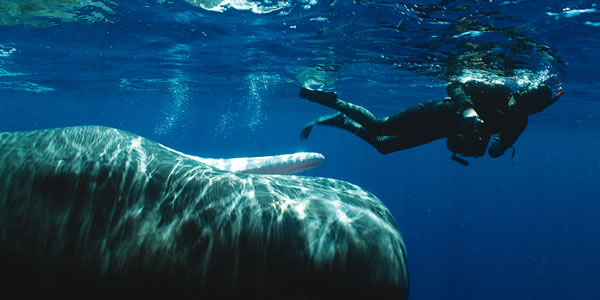 The art exhibit and sale gives art lovers the opportunity to view and purchase original paintings, photography and sculptures created by regional artists. A portion of the proceeds will fund Newport Beach community arts programs. (949-717-3870; newportbeachca.gov)

“Gems of the Medici”

For almost 300 years, the Medici family dominated political and social affairs in Florence, Italy, while directing the course of art history. The world premier exhibition at Bowers Museum will highlight some of the oldest and most treasured pieces of the Medici collections, including antiquities dating from the first century B.C. (714-567-3600; bowers.org)

May 2 – 28, The Orange County Center for Contemporary Art, Santa Ana

The Orange County Center for Contemporary Art in Santa Ana introduces “Mystifications, Manipulations, Subversions,” an exhibit from May 2 – 28. Opening night is May 4, from 6 to 11 p.m., and features the work of Richard Bohn, Mark Bryan and David Ordaz. (714-667-1517; occca.org)

The Waterman Lecture Series at ExplorOcean, home of the Newport Harbor Nautical Museum, welcomes underwater photographer Bryant Austin at 7 p.m. At this special occasion, he will speak about his photographs of whales and his up-close-and-personal experiences with these amazing animals. (949-675-8915; explorocean.org)

From 9 a.m. to 5 p.m., enjoy the Balboa Island Artwalk, located along the South Bayfront Promenade of Balboa Island. With more than a mile of art and live music, enjoy this unique opportunity to meet local artists and purchase that perfect piece to add to your own collection. (balboaislandartwalk.info)

The original and iconic Paramount Pictures film “Flashdance,” comes alive onstage at the Segerstrom Concert Hall May 7 – 19. The musical features a score of the film’s hit songs from the motion picture including “Flashdance … What a Feeling,” “Maniac,” “I Love Rock ’N’ Roll,” and 16 new, original songs written for the stage. Southern California native Kelly Felthous returns home to perform as Gloria, one of Alex’s best friends and coworkers at Harry’s, a neighborhood bar and grill. “It’s a feel-good story about going after your dreams and working hard and earning things, which I think is a lesson we can always be reminded of—that anything is possible,” Kelly says. “Our show is fashion, dance, music—all colliding into one, 2.5-hour production, you know? It’s nonstop and I think it’s a great night out for anyone. Bring the husband, bring the boyfriend, bring a friend—you can’t go wrong with ‘Flashdance.’ ” Tickets go on sale March 24. (714-556-2121; scfta.org) 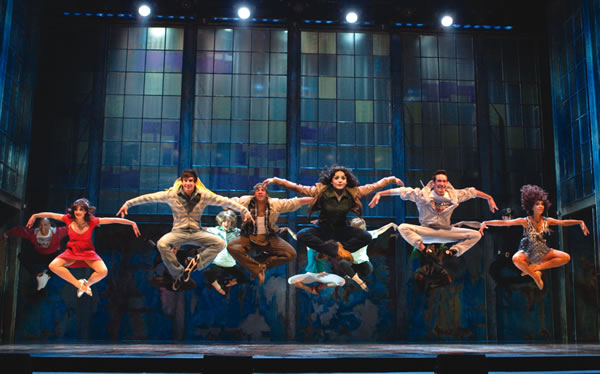