The Dover Shores/Westcliff area, one of Newport’s older neighborhoods, is prized for its nature paths, quality schools, beach access and nearby shopping.

Nestled between the Back Bay and Dover Drive, from 17th Street to Irvine Avenue, the Dover Shores/Westcliff neighborhood combines two of life’s pleasures that Southern Californians hold dear: the great outdoors and great shopping. Residents often enjoy exploring the scenic area with the numerous walking paths that wind around the community to the Back Bay and to nearby Castaways Park. Or for exploring the local waterways; the Newport Aquatic Center rents kayaks. Whether you need a juice fix at Nekter, caffeine from Kéan, groceries, furniture or clothing, it can all be found close to home. Residents love the neighborhood for its laid-back feel, large lots, unique views, well-maintained greenbelt, parks and easy beach access. 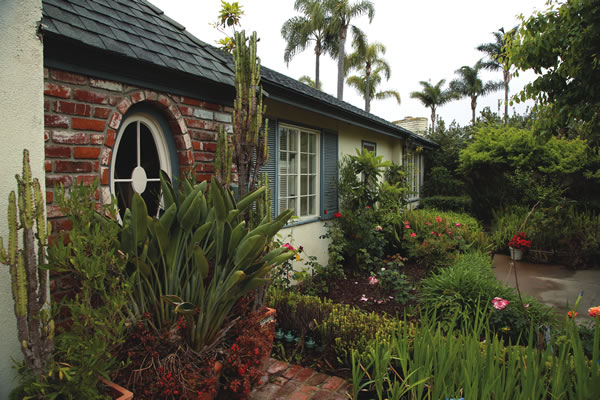 Many family parties have taken place at the Kaplan’s house in Dover Shores. From the street, a large gate on a brick frame opens to the courtyard and the French country exterior of the home can be seen beyond it. Exposed bricks accent the courtyard as well as the interior of the house. Inside, a support wall separates the dining room from the living room and a brick fireplace brings warmth to the sitting room. The tall entryway is lit by natural light during the daytime and a crystal chandelier at night. The primary living areas also have high ceilings with beams.
The Kaplans, along with their four boys who were aged 6 to 13 at the time, moved into the home in 1979. They liked its size and one-story layout, and they were drawn to the good school system. There were also many ways for the family to enjoy the area, including parks with play structures, the beach and places to walk. Arlene says, “There are a lot of walkers in this neighborhood—at all hours of the day and night.”

The Kaplans rearranged the rooms for better flow, to make for easy entertaining. The kitchen’s built-in bar was perfect for hosting parties. In the living room, Arlene stores more than a dozen photo albums under the coffee table for guests to pull out and peruse during family gatherings.

Adding to the family touches are the more than 20 oil paintings by Arlene’s sister Jackie Kamin, who once had a studio in Laguna Beach, and some by Jackie’s daughter, Stacy. Several scenes depict water views, including the Back Bay, which is suitable considering the most stunning feature of the home is the expansive view of the Back Bay, framed by the San Bernardino Mountains to the left and Fashion Island to the right. 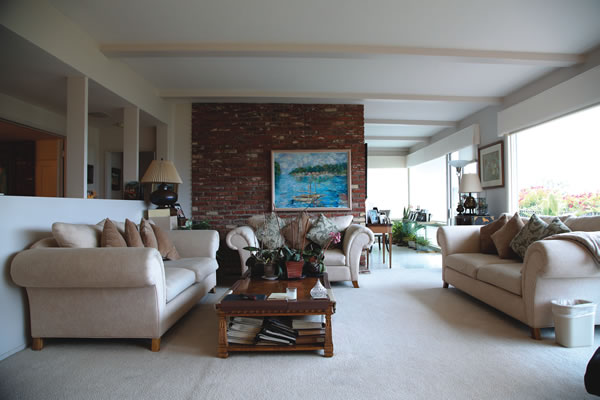 Sliding glass and oversized windows make the view part of the landscape of the home. The Fourth of July is a special treat, when the family enjoys nonstop fireworks, with views of the displays from Disneyland to the bay, all from the comfort of the living room. 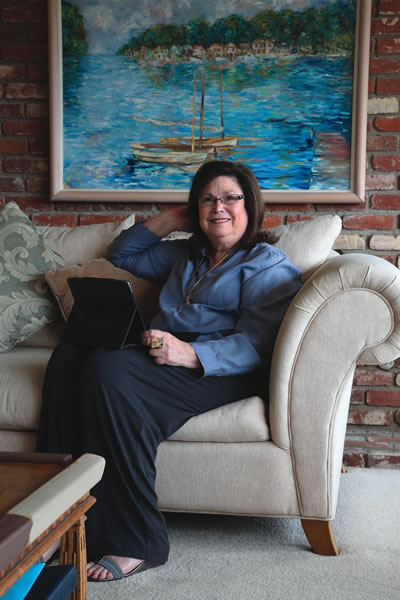 DAY JOB: Arlene is a semi-retired tax preparer; Marvin is a retired surgeon and is active in the homeowners’ association board. Bobby is vice president of national sales for First American Title Insurance Company. Kristen is a homemaker and works part-time for her dad’s consulting company.”

FABULOUS FEATURE: The large, open courtyard with a double iron gate and a brick pathway once was the venue for a family wedding with more than 100 guests. Ferns planted for the wedding more than a decade ago still grow along one side of the yard. 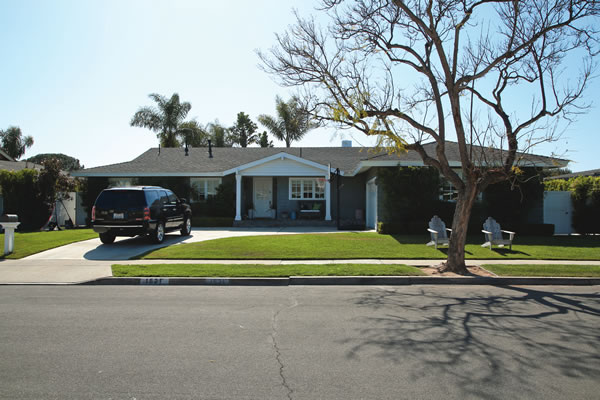 Kristen Hatfield didn’t even get out of the car at first when she and her husband decided to follow signs to an open house not far from their old home in the same neighborhood. The original single-story 1958 home held no curb appeal for her, with its old brick and stucco facade. Her husband saw potential, and he asked her to come take a look.

That was almost 10 years ago. “There’s nothing else original except the fireplace and the walls,” she says. They added air conditioning, with all new ducts. They pushed up the ceiling in the living room, adding exposed beams. The style of the home is now beach-simple, with whites and an airy, relaxed feel and pops of color throughout. 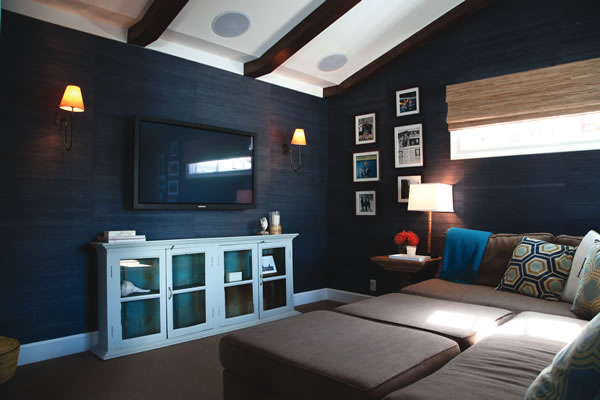 Their projects took place gradually, as they lived in the space and understood what they wanted to change. The new facade is made up of shingles with batten board siding. They pushed out the front, making the kitchen larger, and added a large stone island where the family of four often has meals. But she may have been too successful in making the kitchen a comfortable hangout spot. “We have had 50 people over, and I had to kick them out of the kitchen,” she says.

The family’s favorite things to enjoy together are movies and sports, so they added a room adjacent to the master bedroom that serves as the perfect place to watch family movies or the big game.

Another major change was the backyard. When the boys no longer used the large, rectangular yard for running around, Kristen and Bobby installed a pool, patio and Jacuzzi.

They like the neighborhood for its laid-back demeanor and the opportunities to enjoy the outdoors. Kristen walks their yellow lab in nearby Castaways Park. “My husband loves hopping on his bike and heading down to the beach with the boys,” Kristen says. With the major redesign projects finally completed, the Hatfields plan on enjoying even more outdoor family time at home in the years to come. 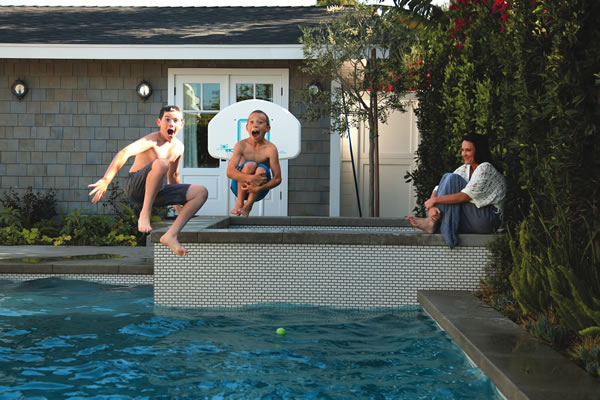 HOUSE TIMELINE: Originally built in 1958, purchased from the original owner in 2004 and remodeled in stages.

FABULOUS FEATURE: The movie room off of the master bedroom, where sports and movies are enjoyed with family and friends, has a screen that by design can be seen from the Jacuzzi. 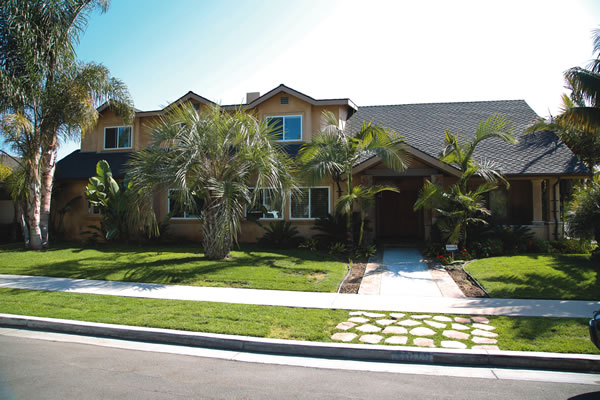 Andrea Martin grew up in Dover Shores and attended its public school, which has an excellent reputation as well as ended up being one of the reasons she and husband Jeff moved to the neighborhood from Hermosa Beach. Other factors for them were the sidewalks, the non-gated community and the fact that Andrea’s parents still live in the house where she grew up, around the corner.

Andrea and Jeff couldn’t stop thinking about the house after they saw it in 2008, and after purchasing it that year they got to work on improvement projects to make the 1963 split-level home into a space that would better fit their lifestyle. The decor is now relaxed Tuscan, with earth tones throughout and an eclectic mix of lifestyle pieces for accents. 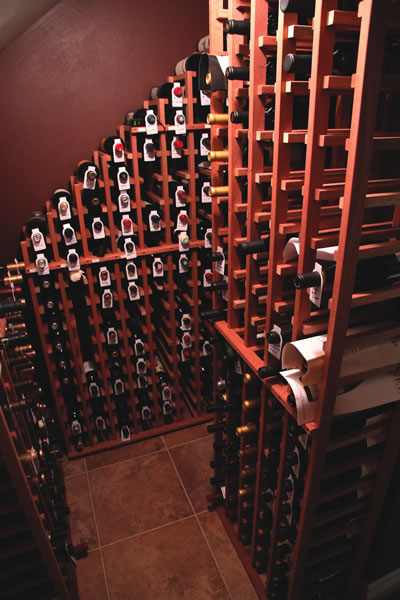 When they purchased the home, the master bedroom was too small for them, so they built a second story. The ability to build up on the property was another draw, as was the large yard. The upstairs now houses a sprawling master retreat, with an office for Andrea, his and her walk-in closets and a spacious tile and woodwork bathroom.

On the lower level, they wanted to make the space feel homier, so they replaced the travertine and carpet floors with a warm hardwood. A downstairs bedroom was converted into a formal dining room. An unneeded hallway was walled off, and they used the extra space for a wine room. They also scraped the old popcorn ceilings, and replaced wood paneling in the basement with drywall. In the kids’ rooms, they doubled the size of the windows, making the rooms brighter. They have an impressive amount of storage, from a tool space near the garage and several deep closets to a big pantry and a storage room upstairs.

The whole family enjoys the basement, where half of the space is set up as a toy room for the kids. Andrea’s elliptical trainer is in the middle of the room, so she can work out while the kids play. And a large-screen TV sits in front of a wide, comfy L-shaped couch. Jeff also enjoys time in the basement, where he works and watches golf and football. Andrea says, “It’s his man cave down there. It’s where he feels most comfortable.”  NBM 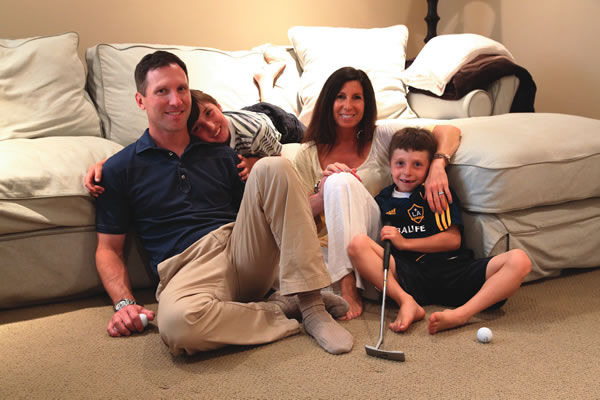 SPACE: 4,650 square feet after remodel, five bedrooms, five baths. TIMELINE: Built in 1963, moved in 2008. FABULOUS FEATURE: The Martins installed a wine room for Jeff’s wine collection, complete with a refrigeration unit. A custom display cabinet for the wines opens up when they have guests.

FABULOUS FEATURE: The Martins eliminated an extra half-staircase leading to the upper level and instead installed a wine room in the space, complete with a refrigeration unit