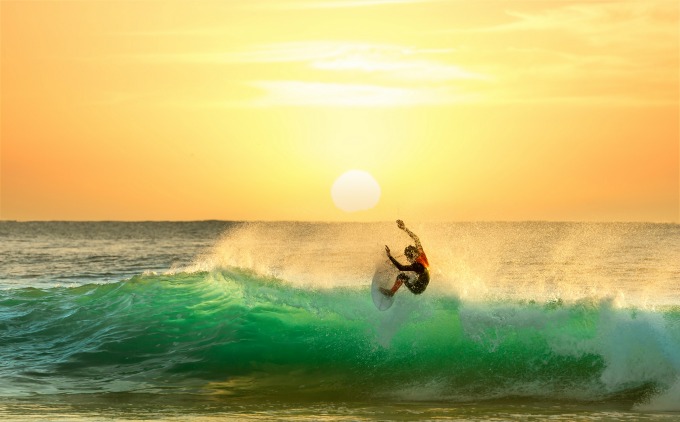 Two new board-sharing services are looking to change surfing from a solitary sport to a social activity.

Newport Beach has long been known as a surfer’s paradise, but the arrivals of two new board-sharing services suggest a sea change in the way surf culture is experienced locally. Both based out of airy, white-walled spaces where the windows and doors are more likely to be open than closed, The Board Club and Daydream Surf Shop’s Surf Club are reimagining surfing as a recreational—even spiritual—activity rooted in a strong sense of community.

Both clubs offer members exclusive access to curated quivers (those are board collections, for the uninitiated), as well as educational resources, networking opportunities and hangout spaces that lend themselves to easy interactions with other like-minded surfers. “It seems like people in Orange County are finding a lot more value in smaller businesses and the sense of community they bring,” says The Board Club’s founder Peter Belden, who opened his Cannery Village space last spring. “Maybe the established surf industry hasn’t quite adapted to that yet, which is why this particular concept is working so well now.”

Born and raised in Newport, Belden balanced summers spent lifeguarding with a decade of sales experience in the real estate and technology sectors. “I chased career advancement and money, not really happiness, for 10 years,” he says, adding that the 2014 death of one of his close friends, fellow lifeguard Ben Carlson, served as a wake-up call of sorts. Shortly after the tragedy, Belden quit his job and spent several months traveling throughout Indonesia and Australia, which is where the idea for The Board Club originated.

“I was sitting in a chair, reading a book after I’d gotten my butt kicked in the water,” he remembers. “I had been riding the wrong kind of board, and I thought, ‘Why can’t I have access to a bunch of different boards?’ ” Drawing on that simple concept and the model of a traditional Australian surf club, Belden began work on a business plan. His resulting Board Club is a multilevel space complete with more than 170 rentable boards, plus a locker room and sun-drenched patio for sipping cold brews from nearby Alta Coffee.

Memberships cost $90 a month, and Belden required at least a three-month commitment. The fee yields access to a diverse variety of boards designed by some of the area’s most beloved shapers, including Almond, Dano and Estrada. Many of the boards available at the club come from independent shapers in the Newport-Mesa area. “Until I see our members really wanting big-name boards, I don’t want to offer those here,” he says, adding that he hopes members will be introduced to shapers they hadn’t previously been familiar with. “When you’re local and you try a board by a local shaper, it then gives you the opportunity to talk to that shaper personally and have them build your next board,” he explains. “I’m trying to bring the surfer-shaper relationship back together.”

Just a couple of miles inland from The Board Club, Daydream Surf Shop’s Surf Club follows a similar format: For $50 a month, members can experiment with the club’s growing collection of nearly 30 boards. “Our membership is capped at 20 members,” says Daydream Surf Shop’s co-founder Kyle Kennelly. “The club is meant to be a fairly tight-knit group of people who are interested in riding boards produced during surfing’s transitional era, which ran from the late 1960s to the early 1970s.”

Alongside his long-term girlfriend, Becca Mantei, Kennelly founded Daydream Surf Shop after returning to Orange County from the Bay Area. “After I graduated from college up there, I worked for a year as an investment banker at J.P. Morgan,” Kennelly says. “I was working really long hours and kind of got into this sleep-deprived, almost delusional mental state. I needed something to meditate on to keep me sane, and the idea for Daydream came from that.”

When Kennelly conceptualized the plan for the shop’s surf club, he focused on showcasing alternative vintage and contemporary boards by shapers like Gato Herói’s Robin Kegel. “We have everything from a 1965 Jacobs board that’s still in pretty good condition, being from 1965, all the way down to an asymmetrical finless board by Ryan Lovelace,” he adds. “You can kind of surf through your way through the years by starting with a chunky 10-foot D fin, and then work your way to more refined boards until you’re surfing some of the most experimental shapes we have available nowadays—a wide mix, because we want to get people to try things they haven’t tried before.”

In both clubs, trying new things also means making connections with fellow surf buffs. Aside from its selections of vintage clothing and handcrafted housewares, a major component of Daydream is its coffee bar, which features roasts from the San Francisco-based company Sightglass Coffee. “I don’t see the point of just having a retail shop,” Kennelly says. “There has to be a sense of community, too. I feel like there are three main places people go: your home, your work and your ‘other’ place. It’s so nice when you can go to that other place and feel like you’re a friend.” Adding to the community feel, Daydream hosts regular classes and workshops for both club members and nonmembers alike; offerings have included a pour-over coffee tasting session and gong meditation.

Likewise, The Board Club presents its own series of events such as surf movie nights and art shows, while also taking part in service-oriented activities like beach cleanups. Belden is currently building out the space’s retail inventory—think art, jewelry and sunglasses by local craftsmen—and all members receive hand-stamped club cards that render discounts at independently owned businesses like Avila’s El Ranchito and Sessions West Coast Deli.

To further incorporate elements of the surrounding community, The Board Club organizes monthly members-only dinners and talks by expert shapers. “We spend at least an hour chatting and meeting new people, and then during the last hour or two we have an open conversation with an expert shaper,” Belden says. “People can ask questions; it’s a safe zone because we’re all here to learn. There are so many different board-building materials and shapers and designs available nowadays—no one person can know everything, but our shaper nights give us an opportunity to share surf knowledge.”

According to Belden, so far the events have been massive hits: In fact, in a recent survey, roughly half of his club’s members said they value the social aspects and networking opportunities their memberships afford just as much as they enjoy access to Belden’s stable of boards. “It was the best feedback I’ve ever gotten,” he says, smiling. “I want the club to be a resource for surfers beyond just the boards. Being a community, we can all learn so much more from each other in different ways.”