On July 19, Flight of the Lasers celebrates its 80th year as a local sailing tradition. The race—which was known as Flight of the Snowbirds until 1975, when the original wooden boats were upgraded to modern, fiberglass dinghies known as Lasers—takes skippers and their crews on a tour around the harbor, starting and ending just west of the Balboa Pavilion.

Hosted by the Commodores Club, the event is not only a fun community gathering as spectators line up to cheer on the competing boats, but it also keeps the sport relevant and familiarizes sailing to a new generation.

“I think it is a great way to introduce kids to the sport of sailing,” explains Brett Hemphill, who has raced in the event for the past eight years. “I have sailed with both of my sons in this race. Our oldest son, Pierce, won the trophy last year for youngest skipper at age 10. He and his friend, Sebastian, also earned an award for Bravery in the Face of Danger. They flipped their Laser at the top mark near Lido Marina Village and sailed all the way back to the finish line near the Balboa Pavilion holding onto the boom. They had no assistance in getting the boat righted, as they would have been disqualified.”

This year, participants of all ages set sail at 1 p.m.; the course usually takes about 90 minutes to complete. Per race rules, a time limit is enforced: If a crew doesn’t cross the finish line within one hour of the first boat to arrive or by 4 p.m. (whichever comes first), it is marked as DNF (did not finish). Following the race, everyone gathers at the Newport Harbor Yacht Club for an awards ceremony where trophies are presented to participants in 10 different categories based on factors like age and finishing time. (flightofthelasers.org) 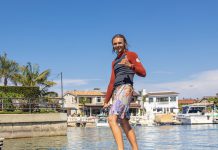 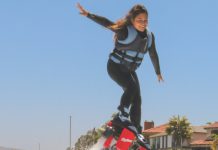 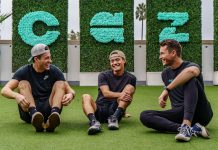 Sweating for a Cause