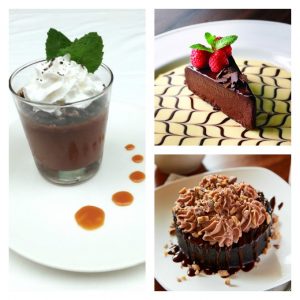 Cocoa finds many forms in these decadent desserts around town.

Long prized by societies dating back to the Mayans and Aztecs, chocolate continues to be valued for its rich flavor as well as, more recently, its health benefits.

It’s believed that the Mayans, who lived in Central America, discovered cocoa around 900 A.D. and began making a frothy liquid of roasted, ground cocoa beans combined with water and chili peppers; they didn’t have sugar, so the resulting beverage tasted bitter. Notably, the term “chocolate” was likely derived from the Mayan word “xocolatl” (pronounced: show-co-la-til), which translates to “bitter water.”

A significant part of the Mayan culture, religious ceremonies often included consumption of this drink. Paintings of the revered cocoa pods were even discovered on their stone temples and the beans were eventually used as currency to pay taxes to the conquering Aztecs.

In more modern times, studies have found that chocolate—especially dark and minimally processed varieties—may lower blood pressure and protect against cardiovascular disease, thanks to flavonoids, which are also found in cranberries, apples, tea and red wine. Additionally, these flavonoids have antioxidant qualities that help combat free-radical damage caused by toxins in the environment.

Today, chocolate is largely used when whipping up desserts and nearly every restaurant has a chocolate option on its menu of sweet treats. While best eaten in moderation to reap the health rewards, chocolate is the featured ingredient in a long list of decadent desserts at Newport Beach eateries, so go ahead and dig in—either by yourself or with your sweetie on Valentine’s Day or any other date night for a special finale to the evening’s meal. 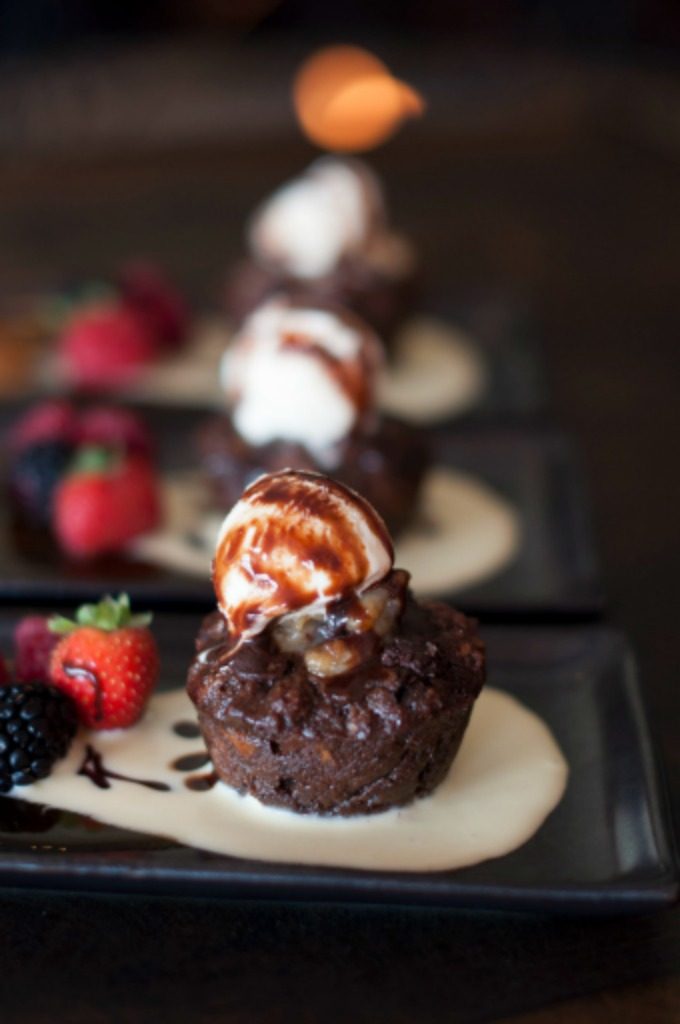 At Sol Cocina, an upscale Mexican restaurant located right on the marina, the dessert menu boasts traditional tres leches cake alongside innovative pink guava creme brulee and nachos dulces, warm tortilla chips topped with cinnamon sugar, dulce de leche, chocolate sauce and whipped cream, but diners will find true indulgence in the banana-dark chocolate bread pudding. “As chocolate delivery systems go, [it] … is easy to make and pretty much foolproof,” says Deborah Schneider, Sol Cocina executive chef and partner. “We serve it warm with Mexican cinnamon-infused creme anglaise and ice cream for a dessert that people fight to get the last bite of. My favorite bite is the little nugget of brown sugar-banana on top under the ice cream.” (949-675-9800; solcocina.com) 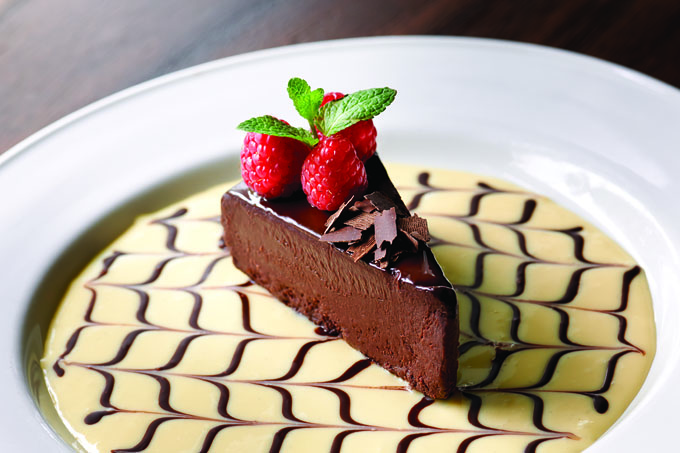 A regular staple on the menu since Mastro’s first steakhouse in Scottsdale, Ariz., the Chocolate Sin Cake is a rich dessert that’s worthy of its name, inviting diners to give in to their cravings. Luckily for those in Newport Beach, the treat is available on the menu at Mastro’s Ocean Club in Crystal Cove Shopping Center. Wade Wiestling, vice president of culinary development for Mastro’s Restaurants, explains that this flourless torte gains its flavor from Tuaca brandy liqueur and espresso. A luxurious layer of dark chocolate ganache tops each sinful slice, which is served on creme anglaise. Garnishes of chocolate quills, fresh raspberries and mint complete the dish. As Wiestling says, “There is no better way to finish the greatest steak dinner, than with one of the greatest chocolate desserts.” (949-376-6990; mastrosrestaurants.com) 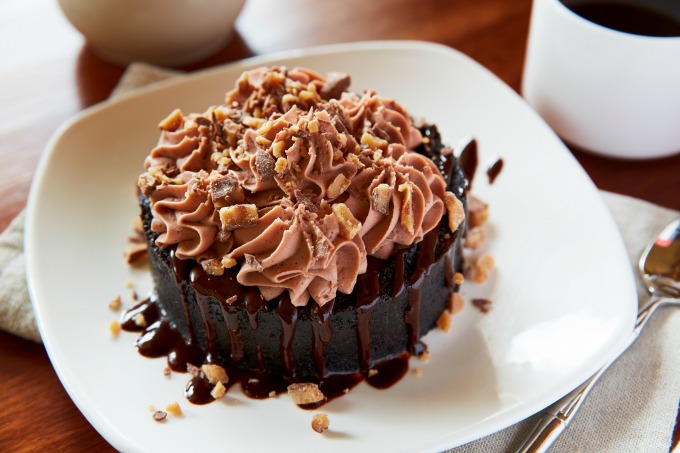 Rather than just a slice, the chocolate malted pie at Tommy Bahama’s Island Grille is prepared as an individually portioned dessert for one guest to savor alone, or share if they’re so inclined. These mini pies are available at the chain’s restaurant in Corona del Mar Plaza along with tropically inspired delights such as pineapple creme brulee and Key lime pie. The chocolate variety, a long-standing option on the menu, begins by baking a crushed Oreo cookie base in a springform pan, then preparing the pudding-like filling with semisweet chocolate and other ingredients, pouring the mixture into the shell and chilling for four hours. Before serving, rosettes of mocha whipped cream are added on top as well as crushed pieces of a chocolate-toffee candy bar like Skor or Heath. “Our chocolate malted pie gives us the opportunity to offer our guest a rich, delicious, decadent chocolate treat in a unique dessert,” says Don Donley, director of culinary for Tommy Bahama. “It combines a smooth, fudge-like consistency of malted chocolate mousse with the dark chocolate cookie crumb crust and a sprinkling of toffee crunch. This is a chocoholic’s dream, but [it] is still light.” (949-760-8686; tommybahama.com) 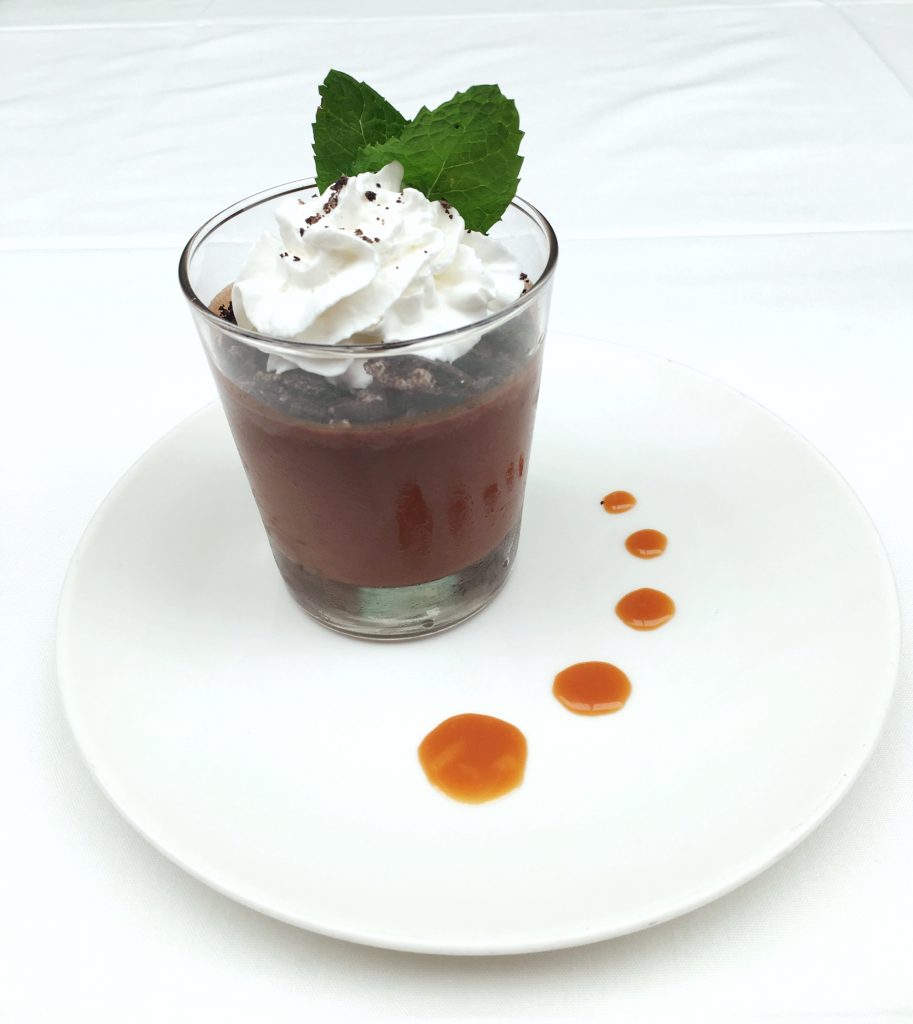 Nestled near the waterfront, complete with a rotating modern art exhibit inside and a wraparound, harbor-view patio for alfresco dining, Bayside Restaurant entices with both its ambience and new American cuisine. Introduced over the summer at Bayside, the chocolate budino is a creamy addition to the after-dinner lineup. Executive Chef Paul Gstrein wanted to create a treat that wouldn’t overwhelm the palate in this beach town where the weather is often warm. “… I wanted to add another chocolate dish [to] the dessert menu but I wanted it to be cool and refreshing, but not lose the rich chocolate flavors,” Gstrein says. To prepare this multistep recipe, the chef combines cream, sugar and vanilla extract in a saucepan, warming only until the sugar melts. Then, the mixture is poured over bittersweet chocolate chips, stirring until dissolved. Next, gelatin sheets are softened in ice water and then added to the chocolate mixture along with cold milk. After allowing the budino to set overnight, it’s served in a small glass topped with whipped cream, caramel sauce, cookie crumbs and a fresh mint leaf. (949-721-1222; baysiderestaurant.com) 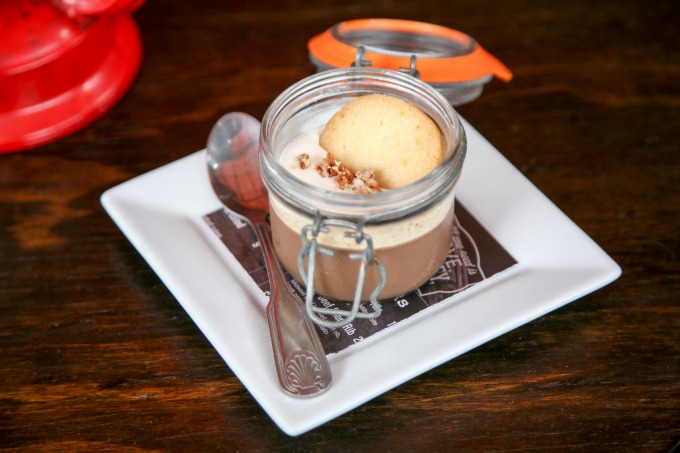 Serving up Southern fare and more than 200 whiskey, bourbon and scotch options, Bosscat Kitchen & Libations features a liquor-infused dessert that brings together the best of both worlds at the restaurant near John Wayne Airport. The chocolate bourbon pot de creme stars luxurious French Valrhona chocolate mixed with eggs, cream, sugar, vanilla, candied pecans and, of course, bourbon. While some may instead be swayed by the eatery’s red velvet churros, those with a hankering for chocolate will want to dig into the pot de creme, which comes served in an old-fashioned jelly jar with hinged lid. “It’s a simple dish made by combining and cooking the ingredients and allowing them to set overnight,” says Peter Petro, chef and partner at Bosscat. “We top it with soft whipped cream, candied pecans and a shortbread cookie. It was inspired by being gluten free (sans the cookie) and a chocolate option, which I feel every restaurant should have.” (949-333-0917; bosscatkitchen.com)