The 78 well-maintained estates, condos and townhomes of Big Canyon enjoy a sense of seclusion amid the liveliness of Newport Beach. Dynamic duo Marin and chef Noah von Blöm—owners of Arc Food & Libations, Arc Pizza House and The Guild Club, an exclusive, members-only bar and dining experience, all in Costa Mesa; and Arc Butcher & Baker in Newport—hung their hats in the community upon deciding they wanted to live in a home smaller than their restaurants, downsizing from their previous home.

“We spend a lot of time, most of our time, at our restaurants,” Marin explains. “They’re our second homes. But it’s important to have a home to escape to at the end of the day, and this place isn’t so big that it’s too much to maintain.”

The von Blöms live in close proximity to all they love outside of their restaurants—family, Fashion Island, the beaches of Corona del Mar and their morning coffee spot, Starbucks, as well as Pain du Monde, where they sometimes go for afternoon tea. Adjacent to Big Canyon Country Club and golf course, which bisects the gated community, Big Canyon also provides residents with a pool, spa, fitness facility and clubhouse.

“We definitely like to entertain and we jokingly call our home ‘Restaurant Marin,’ ” Marin says, referring to the name of one of the couple’s past endeavors that is no longer in operation. “Our home is an extension of our restaurants in that sense.” 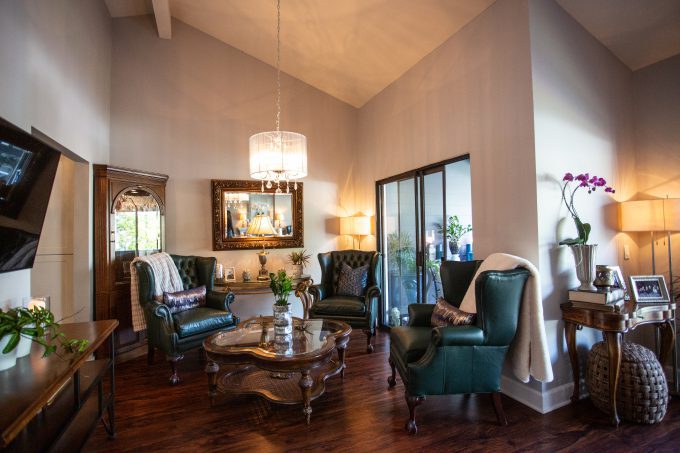 These restaurateurs are busy and, with a palpable level of passion, they’re completely enmeshed in their four restaurants, including the newest, Arc Butcher & Baker, which opened in March. Creating unique culinary experiences is what this pair does best and, in 2018, Noah was even honored as Chef of the Year at the seventh annual Golden Foodie Awards.

A Newport Beach native and chef by trade, Noah began working at the age of 14 for Hans Prager at The Ritz restaurant in Newport Beach. After completing chef training at the now-closed California Culinary Academy in San Francisco, he worked at French restaurant Daniel, a New York establishment with two Michelin stars. Marin, who grew up in La Cañada Flintridge and attended University of California, Irvine, says she’s always been part of the restaurant scene, which is how the pair met and decided to partner up in all respects.

Each of the von Blöm restaurant concepts complements the next. Arc Food & Libations offers patrons culinary creations from an open kitchen concept with a “focus on flame”—every menu item is cooked over a fire then served in black iron—and encourages sharing with family-style dishes. Arc is also committed to pairing American spirits with European liqueurs and boasts a “scratch” bar, which creates in-house bitters, infusions, syrups and sodas.

“We built everything at Arc. It’s [an] extension of our own personalities,” Noah says. “ ‘Welcome Home’ was the tagline for that concept; the restaurants are our homes.”

At Arc Pizza House, wood-fired pizzas are offered as well as an extension of the Arc beverage concept, plus both indoor and patio seating. The decor features modern and vintage elements, all of which were added by Marin personally.

“I’m always up to some new project,” Marin says. “I got into woodworking because I watched what the workers were doing and thought ‘I can do that.’ ”

The Guild, which Noah describes as a sophisticated gentleman’s club, offers classic cocktails and a classic menu. The establishment, which requires membership (unless invited), is a reservation-only dining experience that offers a dramatic glimpse into 19th-century fine dining.

“The Guild is definitely Marin’s masterpiece,” Noah says. “When you open a restaurant, you don’t know what it’s going to become. Our restaurants find their own journey through the culinary experience and the decor.”

Arc Butcher & Baker opened earlier this year. For more than three years, Marin has redesigned and decorated the restaurant, laying every brick, hanging every chandelier and crafting the custom tile work. Located in the Cannery Village, the new restaurant offers butchery, bakery, cafe and take-out menus.

“We’re in the business of giving people what they want [and] what they like,” Noah explains. “Food is nostalgic and the people who come into our restaurants are what truly define each of them.” 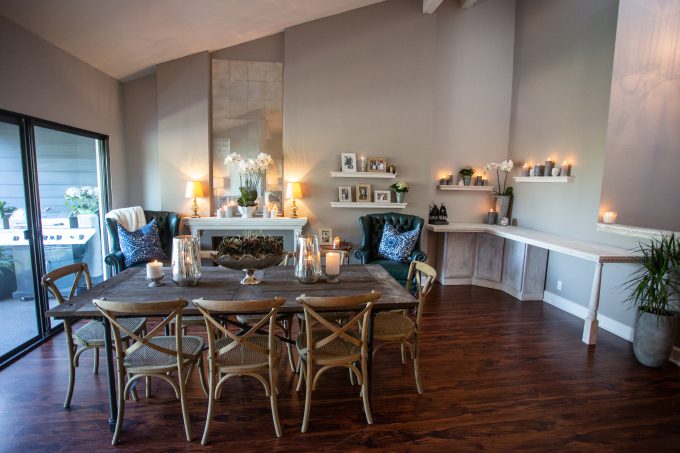 At home, the couple hasn’t changed anything structurally, but they have painted the walls, replaced all of the lighting fixtures, and are considering other improvements, like changing the downstairs carpeting and adding shelves and built-ins in the dining area.

“This house has good bones,” Noah says. “It doesn’t have to be expensive to be amazing. Part of Marin’s game is that once she paints one thing, she moves on to painting or changing something else. She [has] only just begun.”

One thing the couple has changed is the configuration of the living and dining rooms. The larger living room has been repurposed as the dining area, which provides more space for the couple’s in-home gatherings. Marin crafted the carved wood mantle and the mirror installment over the fireplace. The dining nook, furnished with dark green leather chairs, a low glass table and gilded mirror under a dropped chandelier, serves as the sitting area.

“We do the same with our restaurants,” Noah explains. “We build it like we want it, family pitches in, then Marin does every ounce of finishing. She dry-walled the new restaurant herself.”

The busy couple—they are also Pilates instructors and Noah mentions that he plans to run to represent the 48th Congressional District in 2020—note that the kitchen is strictly used for parties.

And, Noah says, the small patio and gardening area, connected to the living and dining rooms by sliding glass doors, are just enough for Marin’s gardening. During winter, there’s a view of snow-capped mountains in the distance.

“[Indoors,] the vaulted ceilings make the space feel large,” Marin says. “There are also windows everywhere, so we get the best breeze. It’s so fun to figure out how to make things—that doesn’t mean it’s going to turn out the way you want it to, but it’s fun.” 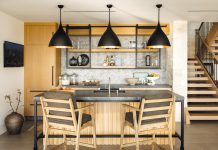 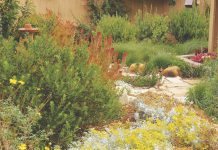