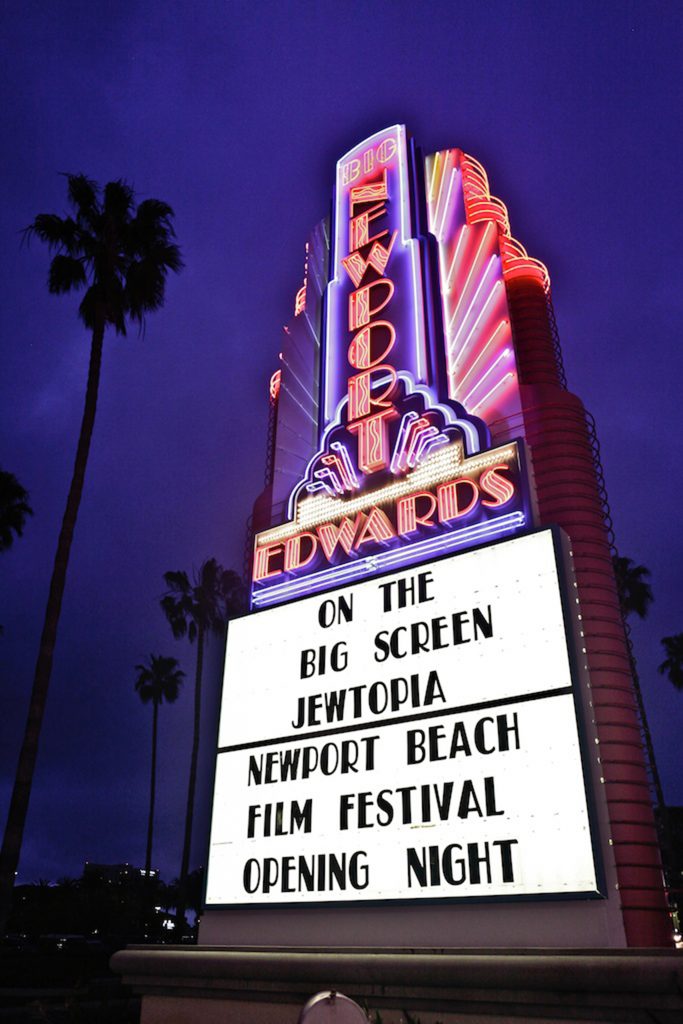 Newport Beach’s cinematic festival returns in April. This year, take a behind-the-scenes look at the exclusive parties, workshops and discussions that comprise the weeklong celebration of moviemaking.

The Newport Beach Film Festival is more than a showcase of the finest in studio and independent films; it’s a cultural collective of creative minds who celebrate their artistry, craft and industry with the scenic beauty of the city as a glorious backdrop. As festival co-founder Gregg Schwenk points out, it all begins with the opening night gala—from there, the high level of energy permeates every activity and event during the weeklong run. The myriad screenings taking place from April 23-30 at venues across town intrigue crowds with entertaining plots and thought-provoking messages; it’s the Q-and-A discussions, seminars and parties, however, that invite movie-lovers to become part of the immersive experience.

“Having been raised my entire life in Newport Beach, I know how special our community is,” Gregg says, adding that the festival is launching a “Made in California” shorts program this year for films shot in the Golden State. “… Whether it’s our seminars, the Q-and-A[s] … or our gala events, [the film festival is] about being able to actively engage our filmmakers, our partners and our community.”

There is a magical moment of anticipation for film lovers when the theater dims and the movie begins, transporting the audience into a creative world. But at the festival, the cinematic magic continues even as the lights turn back on. According to Gregg, between 85 to 90 percent of all films featured include a Q-and-A session or panel with the artists—an important facet that transforms the passive experience of watching a movie into an active one.

One of last year’s most memorable moments came after the rescreening of a 1972 surf documentary, “Five Summer Stories.” The film showed footage of pros carving the waves, but the main attraction was a panel of surf legends that included Gerry Lopez, Peter Townsend, Herbie Fletcher and Laird Hamilton. Former publisher of Surfer magazine Steve Pezman mediated the talk, fielding questions between filmmaker Greg MacGillivray and the subjects of his documentary.

For the younger audience members, an important type of Q-and-A follows movies entered by the major collegiate film programs in Southern California. These sessions give visiting high school students the opportunity to see diverse works from participants in programs at USC, UCLA, Chapman, Orange Coast and Saddleback. They can also interact with filmmakers and faculty, thereby establishing academic connections even before they apply for that particular school.

Often, the Q-and-As even bear fruit for unsuspecting filmmakers. He can’t recall the exact movie, but Gregg describes one early festival year where a member of the audience asked the filmmaker about the next steps needed to bring his flick to the big screen. He indicated that $10,000 was needed for finishing funds and to take it out for distribution; the questioner quickly responded that he would have the money waiting for the filmmaker afterward.

“I had people telling me that they had been in festivals at Berlin and Cannes, … [and] they had never seen anything like this where someone in the crowd says, ‘I’m standing behind what I have just seen,’ ” Gregg says. “And that’s one of the special things at Newport Beach—that you’ve got people in the community who are that passionate about certain types of films and are willing to back that up with capital.”

A second creative opportunity offered is the seminar series, which includes instructor-led educational events that explore different aspects of the industry, be it directing, screenwriting, editing or cinematography. Best of all, these seminars are complimentary to attendees, allowing the general public to immerse themselves in the festival experience.

Last year, highlighted guest speakers included screenwriter Linda Woolverton (“Maleficent”), editor Joe Walker (“12 Years a Slave”) and director John Lee Hancock (“The Blind Side”); a full lineup of this year’s seminars will be released closer to the festival date. One popular event from 2014 included a gathering of composers for major films, moderated by journalist Tim Grieving, who covers the art of scoring music for film.

“I believe film music is an underrated and underappreciated component of filmmaking and film appreciation,” says Tim, who has written for Variety, LA Weekly and NPR, among other publications. “I think it’s great for both filmgoers and filmmakers to spotlight the work and artistry of the composers who contribute so much of the emotion, psychology, subtext and pacing to films.”

Gregg also recalls one past seminar taught by legendary music composer Richard Sherman, who, along with his brother Robert, created the scores for classics such as “Mary Poppins” and “Chitty Chitty Bang Bang.” At the end of the seminar, Richard went to the piano and started playing all of the music he composed over the years. “People were singing along, and they were crying,” Gregg says. “… It was such a special experience.”

Party Into the Night

Newport Beach may not be synonymous with Hollywood glamour—yet, at least—but we know how to throw a party. The galas that close the daily festival events are as much of a draw as the screenings, seminars and panels.
Marjoe Aguiling, director of content production at CNN and a festival judge last year, is impressed with our festival’s range and diversity. “The events and parties are world class,” he says. “… The festival continues to improve—it’s always a fun time. There seems to be plenty of activities for both filmmakers as well as visitors.”

The weeklong party kicks off with the pre-screening reception on opening night; last year, VIPs gathered at Fig & Olive before heading across the street to Big Newport for the main event. The biggest crowds, however, arrive for the after-parties. Those, according to Gregg, can be a challenging task for the festival staff to coordinate, but that just makes the end result all the more rewarding.
Each partner is carefully chosen to coincide with the appropriate occasion; this year, for example, The Botanist Islay Dry Gin from Scotland is sponsoring the United Kingdom showcase. Likewise, the staff tries to align the entertainment with the evening’s theme.

Gregg says that for the Pacific Rim event this year, festival coordinators are collaborating with major Asian and Pacific Islander groups such as the Korean Cultural Center, The Japan Foundation and the Australian American Association. “Those are just a few of the organizations we will partner with to get the word out to that expatriate community to come to Newport Beach,” he explains. “And that is replicated every night with different organizations and groups that reflect the cultural diversity of … our community overall.”
Spirits are kept high with signature drinks, tastings and entertainment. For the last 16 years, many acclaimed musical artists have taken the stage—American Idol winner Taylor Hicks, Cirque du Soleil, Million Dollar Quartet, Mariachi Divas and Hong Kong-based wushu martial artists are among the highlights.

Beyond the musical talent, the festival has become something of a star-studded affair over the years. Gregg rattles off a list of celebrities that have walked Newport’s red carpet, including Will Ferrell, Adam Sandler, Jeremy Renner, Jane Seymour, Andy Garcia and even the late Oscar-winning actor Ernest Borgnine, who visited in 2012 for the screening of his last film, “The Man Who Shook the Hand of Vicente Fernandez.” In 2013, Gregg recalls Green Day members taking selfies with fans before the screening of their film “Broadway Idiot.” International stars make a big splash as well: The entire street in front of the Lido Theatre was closed down in 2013 when a large number of people arrived to see Filipino star Jericho Rosales.

For those in the movie business, these cinematic soirees offer more than just an opportunity to rub elbows with industry vets. Important deals are made at the parties that help turn sleeper films—such as Paul Haggis’s “Crash” or Mark Webb’s “(500) Days of Summer”—into mainstream hits. Just last year, the opening night film starring Matt LeBlanc, “Lovesick,” was picked up for international distribution following its premiere.

But most of all, Gregg stresses that he and his staff endeavor to have every evening gala appeal to filmmakers and film hobbyists alike. “After 16 years, we get locals especially who don’t realize that the festival is for everyone,” he explains. “And that while it might be a very elegant event, it’s a very accessible event. Anyone can attend; anyone can purchase a ticket. This isn’t just for the industry—this is for our community.”