Long before audience members take their seats, the team at Segerstrom Center for the Arts is hard at work to bring magical performances to the stage.
By Sharon Stello | Photos By Jody Tiongco

As the curtain rises on a new season at Segerstrom Center for the Arts, there’s plenty to look forward to at Orange County’s largest arts nonprofit. From dance—such as American Ballet Theatre’s world premiere of “The Sleeping Beauty” in March 2015—to Broadway classics like “The Phantom of the Opera” in August 2015, there’s something for everyone. Pair those fan favorites with a season of jazz, children’s programming and more, and you have a winning formula for a performing arts mecca.

Little do audiences know, however, that the team making the magic happen backstage has as much breadth and talent as the stars under the spotlight. President Terry Dwyer works closely with senior staff and the board to oversee fundraising and strategic planning, but above all, he’s a visionary focused on making the center an integral part of the community. As for the productions that end up gracing the stage, Judy Morr is instrumental in curating a season that will appeal to audiences of all ages. And, there would be no shows to watch without Caitlin Quinn, who leads fundraising to pay the performers and keep the lights on. Meanwhile, Jennifer Turner makes sure the center stays in shape and directs the team that gets the stage set for traveling troupes. Finally, Talena Mara takes shows beyond the traditional audience by coordinating programs that reach students, sick children and military families who may not normally visit the theater. Each with a valuable role to play, here, the center’s key leaders offer a peek behind the curtains. 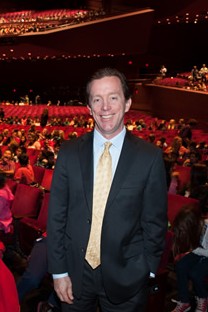 It’s hard to believe that the man tasked with running OC’s biggest performing arts complex was just one decision away from pursuing a career in clinical child psychology. But, ultimately, Terry’s chosen path marked the beginning of a long career in theater management; in his 25-plus years, he has proven a staunch champion of making the arts accessible.

“[The performing arts] can be entertainment or inspiration or helping people see a complicated world through different lenses,” Terry says, recalling an Alvin Ailey show at Segerstrom Center that had a powerful impact on one audience member. The dance troupe’s performance of “Sinner Man” brought a troubled young man to tears, awakening this student to the need for change in his life. “That’s great art at its finest,” he adds.

It’s these kind of moments that keep the momentum going for Terry, who has expanded outreach programs at theaters across the country including Segerstrom Center, where he landed eight years ago. To better reach the community, he has pushed to use the outdoor plaza for free events like movies during summer. “There’s an energy on the plaza … that’s so exciting,” Terry says, remembering one movie night when a mother walked over and thanked him for helping to bring their family together. “We want to be in every neighborhood and school district. … It’s a goal you go toward forever.”

Spotting artistic genius has become second nature for Judy after nearly three decades at Segerstrom Center and 16 years at the Kennedy Center in Washington, D.C. With a sense for shows that resonate with OC’s audience, Judy begins putting the program calendar together two to three years in advance. 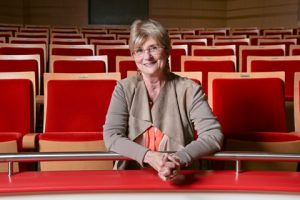 To help her select shows, Judy reads newspapers—The New York Times is “the bible of the industry”—as well as travels to watch performances, including a week in New York to see plays and musicals up for Tony Awards. And in her career at Segerstrom, she cites the Mariinsky Festival with Russia’s Kirov Orchestra, Opera and Ballet in 2006 as the “biggest and the best” of all the show’s she’s organized.

The hardest part of her job, however, are the surprises: an artist gets sick, flights are delayed or a foreign government fails to come through with funding. A nonstop job, her phone sometimes rings at 4 a.m. because she works with agents all over the world, and evenings often find her attending one of the 600-plus productions at the center every year. “If you love what you’re doing, it really doesn’t matter,” she explains.

The Ambassador
Talena Mara, Vice President of Education and Community 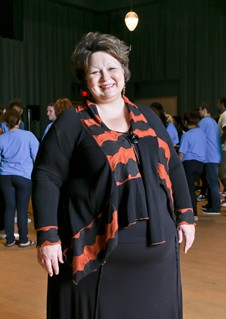 From ceramics lessons that teach chemistry to a pantomime performance about dealing with bullies, Segerstrom Center’s extensive arts outreach programs benefit more than 300,000 children and families annually. And working quietly behind the scenes to make it all possible is Talena, who arranges for artists to help schools meet academic goals or provide entertainment at a children’s hospital.

On an average day, Talena’s schedule is filled with meetings with schools, organizations and community groups, but the effort pays off when she sees lives changed by programs like Summer at the Center for at-risk students who would otherwise be “enemies on the street,” but come together to prepare a music-and-dance show. “[This program is] one of the most impactful I’ve ever been associated with,” she says.

Throughout Talena’s life, the arts have been a constant—as a teen, learning to read music helped her with math, and she’s a former opera singer and Juilliard School music instructor—so it’s natural that now she helps other generations benefit from the arts.

At Segerstrom, her favorite activity is Party on the Plaza, a free music celebration that brings together people from all walks of life during the Off Center Festival. “It’s so powerful when that happens,” Talena says. “And it really shows how much the arts matter in our culture and the community.” 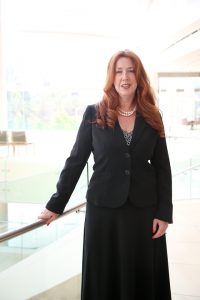 Raising $9 million a year to fill the gap between ticket sales and total expenses is no easy job—just ask Caitlin, whose packed schedule might include breakfast with a prospective donor, followed by meetings with staff or planning for fundraising events like the annual Candlelight Concert. Near the end of a fiscal year, she doesn’t get much sleep, but the biggest challenge Caitlin faces is hearing “no” a lot.

“You’ve got to be thick-skinned,” she says, adding that a former boss once told her that “no” is just the beginning of the conversation.
No matter the obstacle though, she always remembers what’s at stake: supporting a center that presents world-class shows like “War Horse,” which she had already seen twice in London before the play came to Segerstrom in January 2013, shortly after she started the job. “Seeing it … in this beautiful 3,000-seat theater, … I felt this sense of community,” she says.

In that moment, Caitlin knew she was in the right place. Though the native New Yorker could have worked for any number of nonprofits after completing graduate school and learning fundraising skills from her university president, the arts struck a chord with her. In the years since, she’s pursued her passion at prestigious organizations like the Lincoln Center in New York and Goodspeed Musicals in Connecticut.

“The arts are really where my heart is,” she explains. “It’s a universal language. It helps us understand people who are different than us and it gives us a common point of connection.” 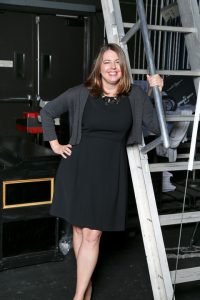 Growing up in a hockey rink in Michigan, Jennifer never imagined she would spend her days managing a theater. But after working at a basketball arena in college and landing her first postgrad job at a theater, she found that overseeing the two types of venues required similar techniques—it’s a realization that’s led to a long career in the arts.

Today, when trucks full of props arrive at Segerstrom Center, Jennifer and her staff are backstage to greet the road crew—and that’s when the excitement really begins to build. “There’s anticipation because it’s a live performance and anything can happen,” she says. “It’s quiet, but there’s electricity in the air.”

In addition to leading the stage crews, she also oversees engineering, security and maintenance projects—the concert hall stage was refinished recently and she had to make sure the massive, 30-ton pipe organ was covered and protected from dust. But there are some things that no amount of planning can prevent: During an Alvin Ailey dance performance in March, a magnitude-5.1 earthquake hit. “All of a sudden, you could feel the building swaying and the dancers kept going and didn’t miss a beat,” she describes. “… It was beautiful.”