With each Little Free Library that pops up in the Newport area, there are more opportunities to learn, grow and explore—just by reading.

Getting lost in the pages of a good book is one of the most charming ways to relax, offering a chance to step away from the real world for a few minutes or hours while simultaneously inspiring creativity and enhancing knowledge. But relaxation isn’t the only benefit instilled by reading. According to the World Literacy Foundation, an Australia-based nonprofit that aims to elevate literacy across the globe, reading can help decrease blood pressure, lower heart rate and reduce stress as well as improve focus, strengthen vocabulary and activate the imagination.

All around Newport Beach, Little Free Libraries are popping up to provide easy access to books—for these reasons and more. These small, usually wooden boxes are constructed in front of homes, at churches, within parks and beyond, with a simple call to action: take a book, leave a book. That means anyone passing by is welcoming to grab a book to read, drop off some for others to enjoy or a combination of the two.

The concept started in 2009 in Wisconsin when teacher Todd Bol built his own library in honor of his mother. As his community embraced the idea, Bol began to think bigger and founded the Little Free Library nonprofit organization three years later. Although he died last year, his legacy lives on in this global literacy movement; this year marks the 10th since Bol’s library was built and already there are more than 80,000 other Little Free Libraries in over 90 countries around the world.

With more than 12 in Newport Beach—seven in Corona del Mar alone—and plenty of others in neighboring cities like Laguna Beach, Costa Mesa and Huntington Beach, visitors and locals alike will have access to reading material through the end of summer, into the cozy fall season and beyond. So whether you opt for a sunny, seaside read on the sand, an afternoon story under shady trees in the park or a literary adventure from the comfort of your own home, there are enough books to go around.

” … it is so important for everyone to have access to books,” says Wendy Frankel, who now manages not only a Little Free Library on the peninsula but the Friends of the Library Bookstore at the Newport Beach Central Library as well.

A Love of Reading

With so many different libraries popping up around town, it’s natural that the motivations behind each are as unique as the books that are placed inside them. Many of those starting their own Little Free Libraries have a background in education, so it’s only natural that they would want to promote literacy.

“I was an elementary teacher for 43 years, so reading has been a huge part of my life and [I] feel that it is so important for everyone to have … access to books,” says Wendy Frankel, who now manages not only a Little Free Library on the peninsula but the Friends of the Library Bookstore at the Newport Beach Central Library as well.

Another avid reader, Dr. Peter LePort, runs a little library of his own in Corona del Mar, citing books as valuable tools for learning as well as an enjoyable way to pass the time. While he works as a surgeon, LePort played an active role in his children’s education, helping to develop a homeschool program for them before going on to open LePort Montessori, a chain of schools throughout California and New York City.

There is even a Little Free Library on the combination school/church campus at Christ Church by the Sea on Balboa Boulevard, launched by a group of retired teachers who wanted to support literacy in the peninsula community.

But education isn’t the only inspiration for these streetside collections. Growing up with parents who didn’t read books, Barbara DeMarcoBarrett, a local author, says she was introduced to the literary world by her half-sister. Now, she has found joy in having a library of her own, and is happy to provide local children with access to books. “When I was a kid, libraries were so important to me,” she says. “… In Corona del Mar, I see so many parents with strollers on cellphones; I just wanted to have books in … [the children’s] awareness.”

Another writer, Candi Sary, began to seek out Little Free Libraries every time she traveled, placing a copy of her own book inside. “It reminded me of being a kid and going to the library to pick out a special book,” Sary says. “… After seeing so many wonderfully creative ways people set up their little libraries, I was inspired to get one of my own.”

These libraries have continued to spread throughout the city, helping to encourage reading among both adults and children.

One of the greatest things about Little Free Libraries is the fact that the owner has control over how they present the books. While there are kits available via the website that provide approximately 20 different styles of pre-made libraries in various colors, including the popular limited-edition replica of Bol’s original structure, participants can also choose to create their own.

Suzi White is the owner of a standout library on Begonia Avenue in Corona del Mar. The Tiki Book Barn, as it is lovingly called, was created this past spring, made to look like a Polynesian hut with a slanted roof, bamboo shoots and a special plaque with two pineapples that reads “Tiki bar.” “My husband, Bruce, made … [it] out of a discarded cabinet and scraps of wood and bamboo,” she notes, adding that she prefers to keep a mix of romance novels, thrillers, self-help books and historical fiction. “I love the whole idea of the Little Free Libraries,” she says. “If we are able to contribute, even just a little bit, in getting people to read more, then it’s all worthwhile.”

Another library, located near the Back Bay shoreline, was created by Kayla Gottlieb as a community service project when she was only 13 years old. Also unique in nature, Gottlieb made the structure using skateboards.

DeMarco-Barrett painted her library herself, placing red and yellow accents on a seafoam green base. She adorned a second box, designed specifically for children’s books, with a Dr. Seuss-inspired painting as well as other kid-friendly characters. In her adult-oriented box, find sneak peeks of upcoming novels—sent for her to review on a book-themed radio show. Many residents who have expressed interest in having their own library have received them as gifts from friends and family. For Frankel, her brother crafted it to resemble an actual library accented with a mini lighthouse on top.

Other locals, like Corona del Mar residents Vivian Bennett and Karen Carlson, received theirs as gifts as well, with Bennett’s presented as a Mother’s Day present and Carlson’s designed by her brother-in-law and painted with flowers by her artistic sister. Both tend to stock the boxes with books from the Newport Beach Public Library book sales. “I try to curate the selection so there is something for everybody—classics, beach reading, mystery, action, humor,” Bennett says. As for Carlson, her focus is more on the little ones. “I try to have a good selection of children’s books,” she explains. For Laura Thiel, who lives in London and shares upkeep responsibilities with her mother, it’s important to have genres for all types of readers, so she includes a mixture of older favorites and new best-sellers. “There is always a treasure to be read hiding behind the little plastic doors,” she says. Crafted by her father in his workshop, the Balboa Island box features paintings and mosaics of sea creatures created by her mother. 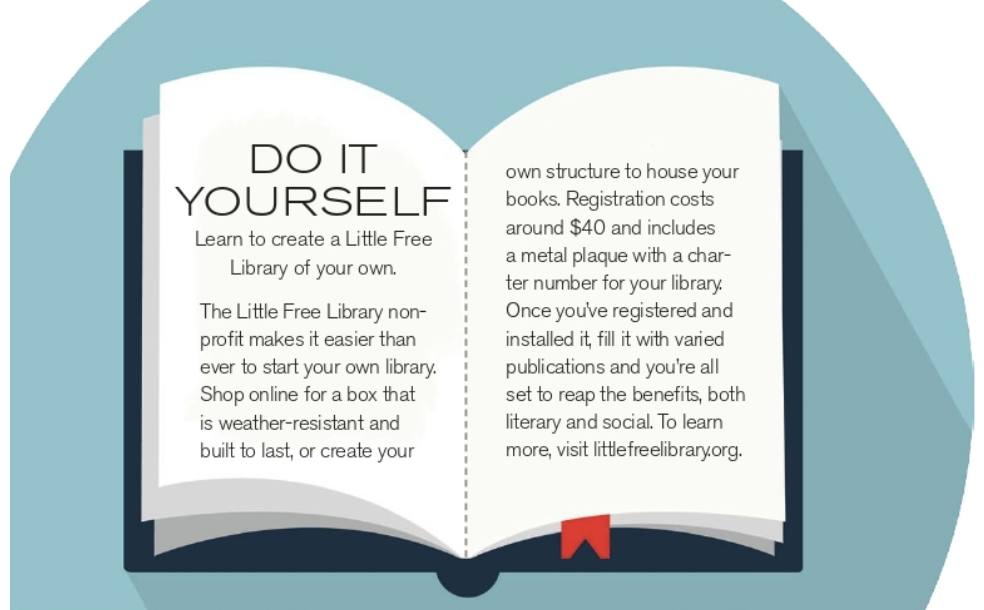 While encouraging a love for reading is almost always what motivates residents to install a Little Free Library, it’s the interaction with the local community that truly makes it worthwhile for most.

“Some neighbors have stopped by or left notes to let me know how happy they are to have it in the neighborhood,” Sary says. “… I think the variety of little libraries in the area have inspired more reading and more generosity. It’s just so wonderful to see people going out of their way to drop off books to share with their neighbors.”

Carlson says her Corona del Mar neighborhood has always been friendly, but she enjoys interacting with beachgoers visiting the shoreline near her home. “People walk by with little ones—particularly when they don’t want to leave the beach and they’re crying—and I say, ‘Here, read this book on your way up the stairs’ and they have a good time with it.”

Over on Balboa Island, Thiel’s is the only Little Free Library around. Because of this, she is able to interact with both locals and visitors. “It is the tourists to the island that love it the most, I think,” she explains. “… In the summer, people come from all over to take from my Little Free Library. I sometimes hear people talking about it in the coffeehouse or doughnut shop on Main Street.” She adds that her neighbors are fans as well, visiting to see which new titles catch their eye.

While the community aspect is important in local neighborhoods, it is especially vivid at local institutions that have implemented one of these miniature libraries. According to Jill Musser preschool director at Christ Church by the Sea, the local community was the main reason they decided to create one. “We want to always be a source of light for the community,” she explains. “… It’s a smell gesture, but fun for the young and old.”

In nearby Costa Mesa, the Little Free Library effort has an even larger impact, with two boxes placed on the plaza at Segerstrom Center for the Arts. With one aimed at adults and a smaller library for children, they’re located in an ideal reading environment as well: a shady grove of trees with a sloping lawn and plenty of benches.  “It’s a very peaceful spot—perfect for quiet, reflective times, coffee breaks and reading,” says Tim Dunn, the center’s director of public relations.

Jason Holland, Segerstrom’s vice president of community engagement, agrees, adding, “We want the Julianne and George Argyros Plaza to be a public amenity and a town square of sorts for our community—accessible to all and family-friendly. We felt the presence of the Little Free Libraries would be another of many great free public amenities on the plaza that would contribute to that spirit.”

So while a love of reading and access to books may be the main goal of the Little Free Library organization, it’s the community engagement that gives the project new life and will let it keep adding chapters to this movement.